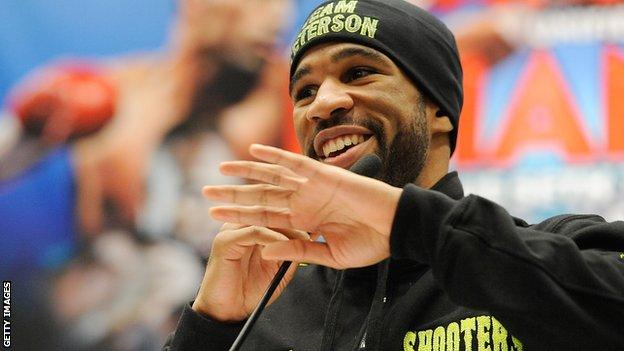 Lamont Peterson, who defeated Amir Khan in a controversial fight in December 2011, has joined the British boxer by signing for Golden Boy Promotions.

Peterson, 29, failed a drug test last year but kept his IBF light-welterweight belt after a medical appeal found in his favour.

The failed test led to the cancellation of a rematch with Khan, 26, in May 2012 but the bout could now be resurrected.

Peterson is due to defend his title against Kendall Holt next month.

"Being with Golden Boy really gives me the chance to make the best fights available in my weight class," he told Golden Boy's website.

"I want to fight the best in the world at 140 (pounds) and I know it can happen as a member of the Golden Boy team.

"I am optimistic that this is a decision that will help further my career."

Khan lost his WBA and IBF light-welterweight titles in a shock points defeat to Peterson in a pulsating fight in Washington DC.

The WBA ordered a rematch, claiming there were "multiple irregularities" in the first fight, but the fight was cancelled nine days before it was due to be staged in Las Vegas.

Golden Boy's chief executive Richard Schaefer, branded Peterson's camp "a disgrace" after the bout was cancelled while Khan was reinstated as champion in July.

However, the Bolton fighter subsequently lost the belt to Danny Garcia when he was knocked out in their unification bout on 14 July.