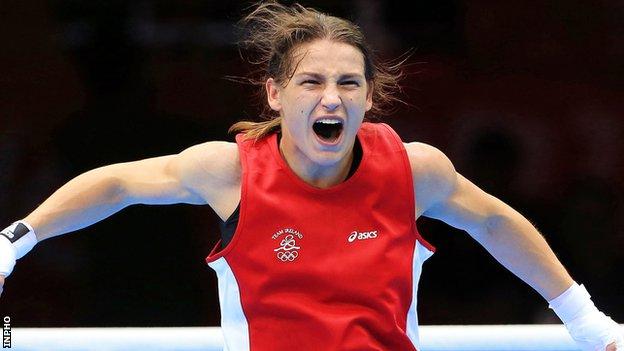 Katie Taylor's father and coach Peter has expressed anger after the revelation that the Women's European Championships scheduled for this year in Ireland will not take place.

Peter Taylor said that the Olympic champion had "wasted" five months of training in preparation for the event originally scheduled for next autumn.

"She'll ask me what we are training for," Taylor the Irish Times.

"Katie's going to say:'I could have taken those months off'. What a joke."

The Irish Amateur Boxing Association were informed by the European governing body on Wednesday that the Championships had been postponed until 2014.

However, Taylor attended an Irish Amateur Boxing Association news conference a day later to publicise the National Elite Championships taking place on 22 February but left the event still unaware that the European event had been put back until 2014.

"I leave a press conference still talking about the European Championships and they (the Irish officials) didn't even say anything when they were sitting there. What a waste of time," added Peter Taylor.

Taylor will make her competitive return to the ring against a Polish opponent in Dublin on 22 February.

The Olympic champion will face Karolina Graczyk at the Citywest Hotel in a fight that will form part of finals night for the Irish Elite Championships.

The Irishwoman will then be in action two days later when she takes on German Maike Klueners at the Bord Gais Energy Theatre in Dublin.

A further contest against Ukrainian Yulia Tsiplakova is planned for the same venue on 22 March.