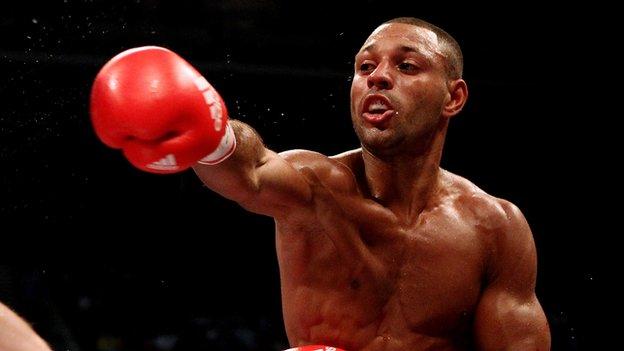 Sheffield fighter Kell Brook says he is devastated his IBF world welterweight title fight against Devon Alexander has been postponed.

Kell's the mandatory challenger - the fight's not going away

The American title-holder hurt a biceps in a training camp to scupper the scheduled 23 February fight in Detroit, Michigan.

The bout, originally set for 19 January, had already been delayed when Brook hurt his ankle in December.

"I'm still confident I can keep my head right and do the job, because I'm a professional. I've had a fantastic camp and I was ready to go over there and take that title.

"I don't know what's going to happen or what the situation is right now. I've got to wait to speak to Eddie [Hearn, promoter] and find out from him. That's all I can tell you for now."

It is hoped Alexander will recover quickly and that the bout will only be delayed by four to six weeks, with Hearn currently working on new dates with his American counterparts.

Who is Kell Brook?

"Kell's got to stay focused and keep his wits about him because he's the mandatory challenger, he's not going anywhere," said Hearn.

"So he's just got to stay focused and I'm pushing Golden Boy for a new date as soon as possible.

"Kell's absolutely gutted but like I say, it's not like he's just a voluntary challenger and the fight's going to go away. He's just got to be a pro about it and make sure he does the right things now."

The 25-year old Alexander has won 24 of his 25 bouts, with 13 knockouts, and is a two-weight world champion.