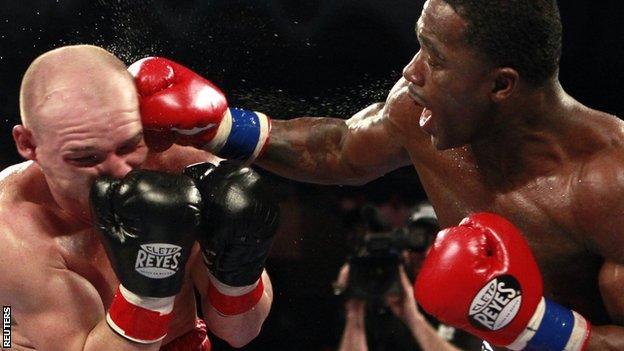 The brave Welshman started brightly and took the first round against defending champion Broner.

However, Broner took control in the third with a flurry of shots landing before the bell and he then floored Rees in the fourth.

Another knockdown followed in the fifth before Rees's corner pulled him out with Broner landing with ease.

"I'm disappointed in my performance, I made a lot of mistakes," said the 32-year-old Rees.

"He kept coming and threw every shot like it was his best shot,'' said Broner, 23, who is now undefeated in 26 fights.

"I knew he would be tough - he's tougher than a steak that's well-done.''

Rees, who is a former world light-welterweight champion, came into the contest as a massive underdog against Broner, a two-weight world champion.

The brash American ensured there was plenty of needle between the pair before the bout with his usual confident attitude but it was the challenger who got off to the better start.

Rees managed to land a number of shots to the head and body in the opening exchanges to get the fans in the Boardwalk Hall on their feet as Broner took his time getting going.

But despite his positive attitude, Rees was not hurting the American who offered plenty of showboating before exploding into action at the end of the third as he pinned the Welshman on the ropes with some slick combinations.

A swift right uppercut from Broner had Rees on his back in the fourth but the plucky challenger beat the count before his coach Gary Lockett warned him in the corner that he would stop the fight.

Rees insisted he was fit to go on but a left hook to the body in the fifth sent him down on one knee - although there was confusion as referee Earl Brown appeared to call break just before the shot was thrown.

The former WBA light-welterweight champion beat the count again but with Broner landing some big punches soon after, Lockett had seen enough and waved the towel to alert Brown who stopped the fight.