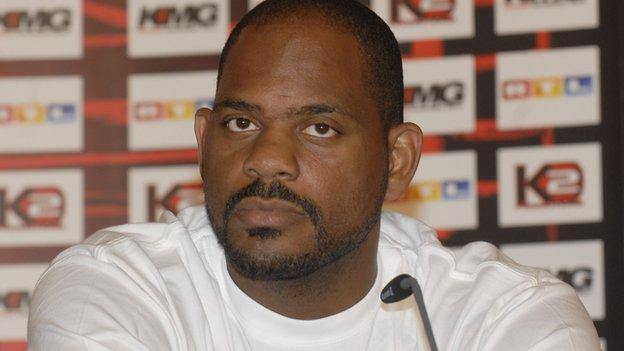 Tony Thompson says Saturday's fight with British heavyweight champion David Price is the "last chance saloon" as far as his career is concerned.

The 41-year-old lost in six rounds to Wladimir Klitschko last summer but claims he underperformed on the night.

"I started boxing as a club fighter, but I am not going to finish my career that way," said the American.

"The fire is still there because I find it hard coming to grips knowing that if I lose to Price I have to quit."

Thompson has lost just three of his 39 fights; two of those coming in world title bouts against Klitschko.

"I never got into the second Klitschko fight mentally. People are used to seeing me be aggressive in the ring and I never got to that point.

"I had my kids with me and I was more a father than a fighter that day.

"I have left them at home for this fight and there are new voices in the corner that believe in me and will push me."

When the fighters meet at the Liverpool Echo Arena, it could be the perfect time for the American, with Price seemingly focused on setting up a fight with Tyson Fury.

Fury recently withdrew from negotiations for a clash with the British champion for a second time, leading to speculation that he does not want to fight the Liverpool-born boxer.

"Sometimes it's about striking while the iron's hot and I think in six months this fight is going to be as big as it's ever going to be without a world title on the line," said Price.

"How long is it going to take for one of us to get a world title? Because of the politics of the sport, who knows?"