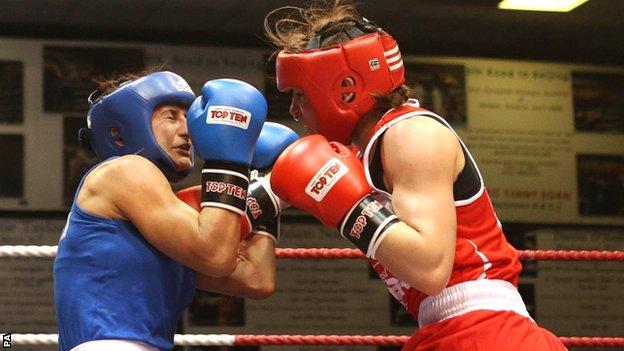 Olympic champion Katie Taylor returned to the ring in style with a 28-5 win over Poland's Karolina Graczyk at the National Stadium in Dublin on Friday.

It was her first bout since winning Ireland's only gold at London 2012.

The 26-year-old displayed relentless accuracy against Graczyk, who did well to avoid defeat until the final bell.

Taylor is scheduled to fight again in Dublin on Sunday as she plans for a competitive return, likely to be at the EU Championships in Hungary in June.

Taylor, who carried the Irish flag at the opening ceremony for London 2012, became the first female Olympic lightweight champion with her victory over Russian Sofya Ochigava in Stratford, and was named Ireland's Sports Personality of the Year.

Although not quite reaching the fever pitch atmosphere after her victory at the ExCeL in August, Dublin's purpose-built boxing arena was filled to capacity and gave the four-time world champion a rapturous reception.

She was caught by a couple of counters in the second round but soon found her range with her clubbing left hand, and seemed to relish the chance to work off the rust that had gathered from her six months out of the ring.

Another booming left at the start of the third prompted the referee's intervention to issue Graczyk a standing eight count, and Taylor's accurate range of shots soon had the referee stepping in again.

After being awarded a comprehensive victory she said: "The fans have been incredible for me over these last few years so it's great to fight in front of them.

"She was a quality opponent and it was good to get back in the ring."