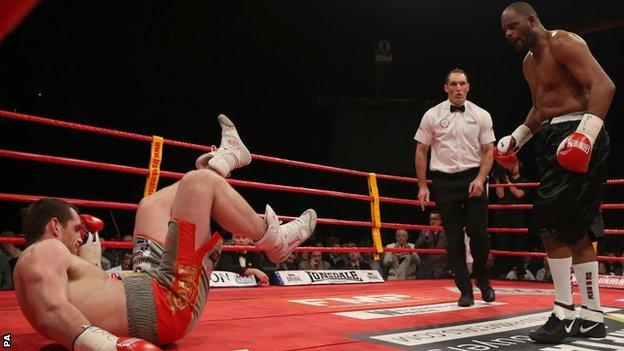 Great Britain's David Price was sensationally knocked out in the second round of his fight against American Tony Thompson to suffer the first defeat of his professional career.

The 6ft 8ins heavyweight had won all 15 of his previous fights.

But he was floored by a right hook to the side of the head at the Echo Arena in Liverpool.

Price, 29, failed to connect with a right hook of his own and was knocked to the canvas by a sucker-punch.

Despite getting back to his feet, the Beijing Olympian was clearly shaken and in no fit shape to continue and was counted out by the referee.

The knockout silenced the expectant home crowd and will damage Liverpudlian Price's aspirations of fighting for a world title before the end of the year.

Thompson has fought for two world titles of his own - both times beaten by heavyweight king Wladimir Klitschko - and the 41-year-old appeared as surprised as anyone that he had caused such an upset.

Looking flabby, he had barely thrown a shot in anger in the opening round with both fighters happy to have an early look at each other.

It appeared Price was starting to assert some dominance early in the second round when he pushed Thompson back on to the ropes with one of his trademark rights and set to work on unloading some body shots.

Thompson managed to work his way out of trouble and, when Price failed to connect with another right hook, he floored the Briton with a counter.

"If he takes this loss and builds on it, he will become world champion. It just wasn't his day, it was Tony Thompson's day."

It initially appeared an innocuous shot, but it soon became apparent that Price was in trouble - his legs struggling to hold his giant frame as he was raised from the canvas.

It later emerged the punch had perforated Price's ear drum.

Thompson, obviously delighted by one of the best victories of his long career, then raced around the ring shouting: "I told you so," to the silenced spectators.

Price and his team must now make sense of this defeat as they attempt to plot a new route towards a world title shot.

The night ended on a further sour note for Price's camp with promoter Frank Maloney being treated by paramedics after falling ill.