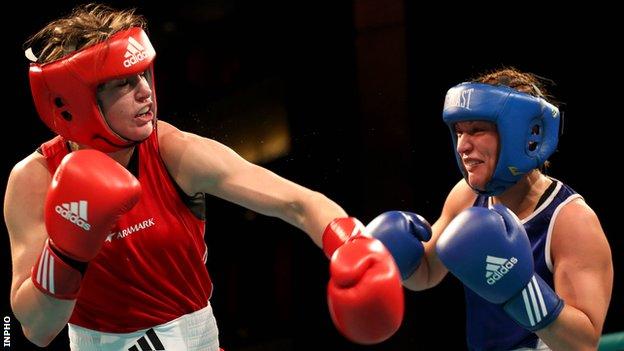 Taylor was afforded a vocal reception as she topped the bill at a packed Dublin theatre in her second contest since winning gold at London 2012.

Kluners took a standing count in the second round as Taylor, 26, secured an easy victory.

On Friday, she beat Poland's Karolina Graczyk in her first post-Games bout.

"It has been a long lay-off from competitive action since the Olympics," said the lightweight champion.

"It is great to have had two fights and two wins in Dublin this weekend."

The victory over Graczyk came in a support fight at the Irish Championships staged at the National Stadium.

On Sunday the 2,000 crowd, many of them women and children, had bought tickets just to see the champion, who captured the country's imagination with her performances in London.

Taylor will be back at the Bord Gais Energy Theatre on 24 March to face Ukrainian champion Yulia Tsiplakova.