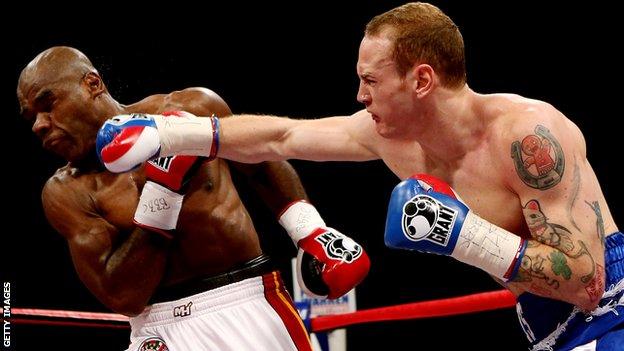 George Groves has signed with promoter Eddie Hearn after announcing his split from Frank Warren and pulling out of a challenge for the European super-middleweight crown.

Groves will also appear on the Carl Froch-Mikkel Kessler bill on 25 May.

"Eddie Hearn is doing great things promotionally and I'm excited to be a part of it," said Groves, 24.

"I've had three fights in 18 months, which is not ideal, so it will be great for me to get out regularly.

"I'm healthy, I'm training hard and Eddie has promised to keep me busy, so everything is looking good and I'm raring to get back into action."

Groves's chief support slot on the Froch-Kessler bill will come two years after the most high-profile win of his career, over James DeGale.

Londoner Groves is targeting the winner of the fight between WBO title-holder Arthur Abraham and Robert Stieglitz, which takes place on 23 March.

"I'm ranked number one with the WBO so I'll be keeping a keen eye on that fight," said Groves.

"But I'll have just as close an eye on the Froch v Kessler fight as I really believe I could get a crack at the winner and Eddie knows I want that fight."

Groves was scheduled to fight Senegal's Mohamed Ali Ndiaye at Wembley on 16 March before announcing his split from Warren.

"He has stated that he is not interested in boxing for the EBU title and would like to take his choice of fights in another direction," said Warren. "I wish George all the best."

Groves has won all 16 of his professional fights, 12 inside the distance, and has successfully defended his Commonwealth title on four occasions.