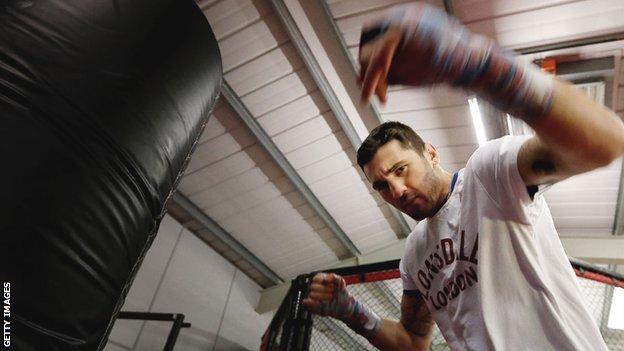 The Welshman was due to face mandatory challenger Krasniqi on 16 March, but the bout will take place on 20 April.

It follows the cancellation of two other fights on the bill - the European super-middleweight clash between George Grove and Mouhamed Ali Ndiaye and the Ricky Burns versus Miguel Vazquez bout.

Cleverly has also been suffering from a stomach ailment.

And his father and trainer Vince Cleverly says the delay could work out well for the champion.

"Nathan lost over a stone in a week, he was a bit dehydrated," he said.

"He would have fought if the show had gone on, but perhaps it's a blessing in disguise really that the show had to be called off."

Two bouts have been cancelled for differing reasons.

At the weekend Commonwealth champion Groves withdrew from his challenge for the vacant European super-middleweight title against Frenchman Mouhamed Ali Ndiaye.

And on Monday IBF world lightweight champion Vazquez's camp announced he had food poisoning and would be unable to face WBO champion Ricky Burns in a unification bout on the original date.

Cleverly's team say their fighter is back in full training after recovering from a stomach bug.

And they are confident the delay will not jeopardise a potential unification fight with veteran American Bernard Hopkins.

Hopkins, who has won 52 of his 62 fights, fights IBF title-holder Tavoris Cloud in New York on 9 March before he can fight Cleverly.

"Provided Hopkins comes through his fight with Tovaris Cloud this weekend and Nathan beats Krasniqi on 20 April, then a massive unification fight will happen," said Vince Cleverly.

Frank Warren Promotions have said that all tickets will be valid for the re-scheduled date and that tickets bought from Team Clev will be refunded if the buyer cannot make the new date.