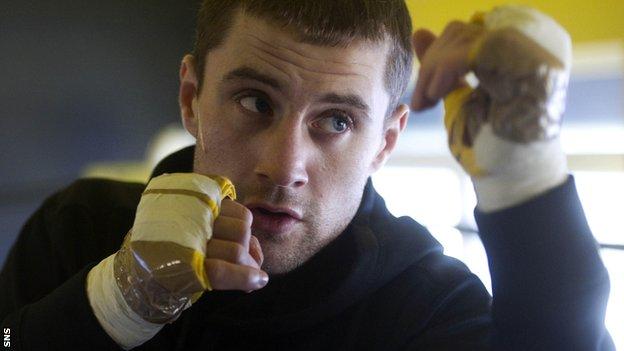 They were due to meet in London on 16 March but IBF champion Vazquez has pulled out with a viral infection.

Instead of WBO title-holder Burns fighting a replacement, the match has been rescheduled for 20 April at the same venue, London's Wembley Arena.

Nathan Cleverly's defence of his WBO light-heavyweight title against Robert Krasniqi has also been postponed.

George Groves, who was due to challenge for the European super-middleweight crown, had already withdrawn from the card after splitting from promoter Frank Warren.

Burns, 29, said on Twitter: "Absolutely gutted this fight ain't happening, another training camp and it's fell through.

"Not only that, feel sorry for the fans, my friends and family who have now booked tickets, flights and hotels for 2 fights for it to fall through."

Burns, from Coatbridge in North Lanarkshire, has not fought since beating Kevin Mitchell last September.

He was supposed to make the third defence of his WBO belt against Liam Walsh last December only for the Englishman to be injured in a car crash.

"It's very unfortunate that Vazquez has had to withdraw so close to the fight," said Warren.

"But it is on medical grounds, which is beyond my control, due to his viral infection, and we have his doctor's certificate confirming this.

"Therefore I have had to postpone the fight, not cancelled as stated in some media reports, to Saturday 20 April at Wembley Arena.

"Everybody is disappointed by this postponement, but we have worked hard to ensure that Ricky's unification fight still goes ahead."