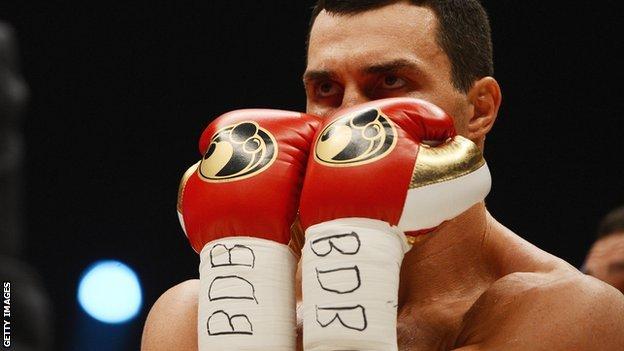 Wladimir Klitschko will defend his WBA, IBF and WBO heavyweight titles against former sparring partner Francesco Pianeta in Mannheim on 4 May.

Ukraine's Klitschko, 36, is making the 14th defence of his second stint as a world heavyweight champion.

Pianeta, who is from Italy but resides in Germany, is undefeated in 29 professional fights, with one draw.

"Many see me as an outsider but I will knock Klitschko out and turn the world of boxing on its head," said Pianeta.

Victory over the 28-year-old Pianeta would probably see Klitschko fight Alexander Povetkin in the autumn, although the unbeaten Russian has avoided fighting Klitschko in the past.

Klitschko's last victory was a unanimous decision over Mariusz Wach in November.

Wladimir's older brother Vitali holds the WBC title while Britain's David Haye and Tyson Fury are ranked in the top 10 by the WBA, IBF and WBO.