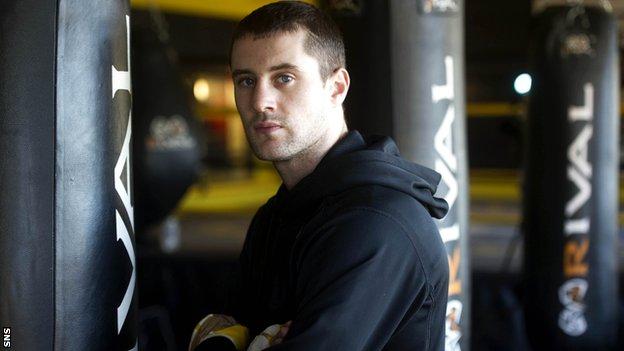 Scottish boxer Ricky Burns has been left angry at the collapse of his world unification title fight on 16 March.

The WBO lightweight champion's clash with IBF title holder Miguel Vasquez was postponed due to the Mexican suffering from a viral infection.

He's spent around £12,000 of his own money in training costs and sparring partners - and all for nothing."

"To say he is angry and fed-up is putting it mildly," said Burns' manager Alex Morrison.

"He's spent around £12,000 of his own money in training costs and sparring partners - and all for nothing."

Morrison said relations with Frank Warren were strained after the promoter indicated the fight could be re-scheduled for April.

"We'll see," said Morrison, who doesn't believe Burns is getting the respect he deserves.

"Ricky has been training hard since his last fight was called off three months ago - that was also at the last minute."

On that occasion in December, Burns was due to defend his WBO lightweight title for a third time against Filipino challenger Jose Ocampo, but the fight was cancelled less than a week before it was due to happen amid suggestions that Ocampo's trainer had died.

Burns now plans to take a short break from the ring.

Meanwhile, rival promoter Eddie Hearn, who signed up super-middleweight George Groves after he left Frank Warren's stable of fighters last week, says that if Burns was to become available he would definitely want to speak to him.

"But we do not speak to people who are signed to others."