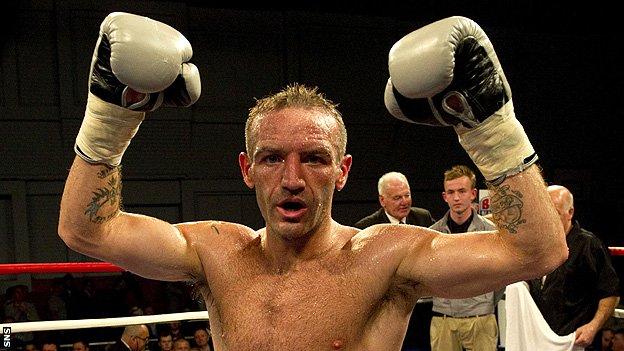 Harrison, 35, said: "I am ready to give the fans the fight Scotland wants to see - me against Ricky Burns. It would be a cracking fight for the fans."

Burns's camp is refusing to confirm or deny speculation that the fighter will announce on Monday that he has joined forces with Essex promoter Eddie Hearn.

Hearn has called a media conference for lunchtime on Monday to announce his "latest major signing".

Relations between Burns's management and Warren soured after the proposed lightweight unification bout against IBF champion Miguel Vazquez at Wembley on 16 March was postponed until 20 April when Vazquez's camp announced he had a stomach bug from food poisoning.

But with Burns splitting from Warren, some, including Burns's manager Alex Morrison, are questioning whether that fight will go ahead.

Perhaps a more likely next bout for the Coatbridge champion would be an all-Scottish encounter against Harrison in Glasgow in May.

"I get the impression there have been quite a few problems for Vazquez and I am ready to fight if he is unable to," added Harrison.

"If there are any more problems or delays it makes sense for Burns to fight me instead.

"I just want to let the public know and let Ricky Burns know that I am ready to make the fight happen."