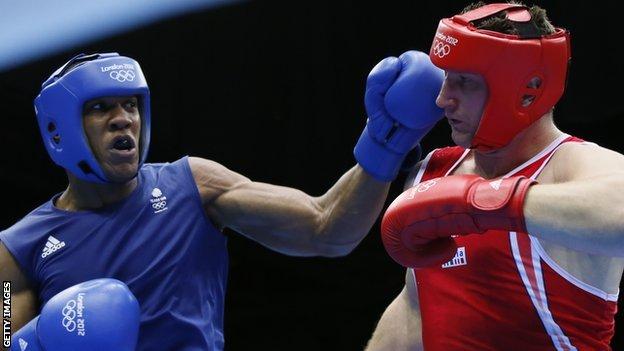 The International Amateur Boxing Association has confirmed that headguards will be removed from men's amateur boxing but not for women.

Headguards were first introduced into competition in 1984 but will be removed again for October's World Amateur Boxing Championships in Kazakhstan.

The decision was based on two separate studies which put forward evidence that the removal will decrease concussions.

Women and male boxers below senior level will continue to wear headguards.

AIBA's medical commission studied more than 2,000 bouts and independent research in a recent article, which studied 30,000 contests over 59 years, in the British Journal of Sports Medicine both supported the removal.

The International Olympic Committee has yet to officially confirm that headguards will be removed for the 2016 Rio Olympics but their medical commission were part of the discussion process with AIBA.

"It is AIBA's duty to bring the sport of boxing to the pinnacle of the Olympic movement and I am convinced that these changes will critically contribute to the development of our beloved sport," said AIBA president Dr Ching-Kuo Wu.

Some elite male amateur boxers have competed already without headguards in the World Series of Boxing which is a semi-professional franchise-based branch of AIBA in which Great Britain are represented by British Lionhearts.

WSB began in 2010 and includes team and individual competitions, with the latter offering Olympic places for successful participants.

AIBA is also set to launch its own professional boxing body (APB) later in 2013 which will allow, like WSB, amateur boxers to earn purses for competing while maintaining their Olympic eligibility which was previously prohibited.

All three forms of the sport will also be judged on the 10-point must system as the computer-based points-scoring system, which has been in place since the 1992 Barcelona Olympics, is to be abandoned.

May's European Amateur Boxing Championships in Belarus are expected to be the final major men's international competition to use headguards with the official date of 1 June 2013 for their removal.