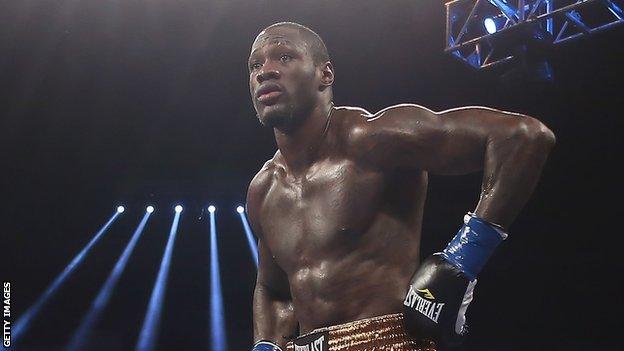 American heavyweight Deontay Wilder has promised to knock Audley Harrison into retirement once and for all when they meet in Sheffield on 27 April.

Wilder, who has beaten all 27 of his opponents inside the distance, faces Harrison on the undercard of Amir Khan's clash with Julio Diaz.

"I'm the knockout king and I've got to keep that name going," said Wilder.

"So I'm predicting a knockout. If I connect correctly, I can put you into retirement - or a retirement home."

The 27-year-old Wilder was the last American man to win an Olympic boxing medal, securing a bronze in Beijing in 2008.

He turned over to the paid ranks later that year and has established a reputation as one of the most exciting names in the heavyweight ranks, with 15 of his fights finishing in the first round.

Harrison, meanwhile, was not able to build on his gold medal at the 2000 Olympics, with early knockout defeats by fellow Britons David Haye and David Price seemingly ending his world title hopes.

However, the 41 year old won Matchroom promotion's Prizefighter tournament for a second time in February, which convinced Harrison to continue.

"He's a guy that has a lot of heart," Wilder told BBC Sport. "He falls and he keeps getting back up - I like that in him, the fact that he wants something so badly that he keeps going.

"But I don't think he's going to stop Deontay Wilder from doing what he's got to do. He's on a mission but I'm on a mission, too.

"I'm the next heavyweight champion of the world, I don't see no man who's going to stop me."

Wilder's power is beyond question, although some wonder whether he has the all-round abilities to reach the very top of the sport.

"I want to show people I've got a lot more weapons to pull out of the bag, all kinds of special things," said Wilder.

"And knocking people out is a great feeling. Sometimes I'm scared of my own power because I don't know the limits of it, especially when I feel the bones of a man's face inside my glove."