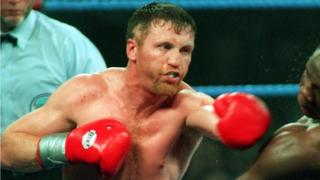 The prospect of veterans and former world champions Roy Jones Jr and Steve Collins fighting appears to have moved a step closer.

Collins, 48, said on Wednesday that he had been granted permission to box again after more than 15 years away from the ring, although it is not clear which governing body has given the Irishman his licence.

FA Cup: Southampton 1-0 Shrewsbury - League One side trail early on