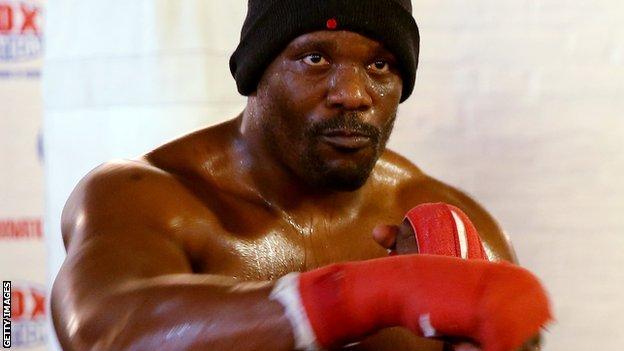 The 29-year-old will face Argentine Hector Alfredo Avila over 10 rounds in London on Saturday while British champion Price is preparing for a rematch with Tony Thompson on 6 July.

"David's got some unfinished business," said Chisora. "He should train hard and do this schmuck quickly.

"I expect him to win the rematch. Me against him would be a great fight for the summer."

Chisora will be fighting for the first time since his British Boxing Board of Control licence was reissued in March, having been withdrawn following a brawl with David Haye during a media conference in Germany a year earlier.

The Londoner's last fight was a defeat by Haye in July 2012 in a bout licensed by the Luxembourg Boxing Federation.

He is expected to beat 33-year-old Avila, who has 12 defeats on his 33-fight record, at Wembley Arena and is already planning a meeting with Price.

Liverpudlian Price suffered the first defeat of his career in February when he was stopped in the second round by American veteran Thompson.

Price is keen to avenge that loss, revealing last month that he "had to take a hit in the pocket to get the rematch", having turned down a fight with Chisora "for really good money".

He also said: "A potential fight with Chisora will be there for me after the Thompson rematch."

Chisora added: "I believe that David was caught by a lucky shot [against Thompson] and anyone can go down with those types of shots.

"David has nothing to be ashamed of and shouldn't be putting himself down.

"I like David, I don't have any quarrel with him. He's a family man and a cool guy, but this is a business.

"It's exciting to be back in the ring after almost a year out. I'm looking to destroy Avila first and then face one of the other so-called rivals next. If it's David then great - I know he wouldn't be able to stand up to my power."