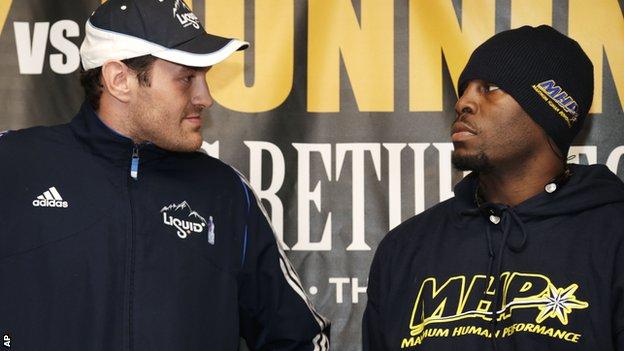 Tyson Fury believes a heavyweight world title bout against either of the Klitschko brothers is unlikely.

Vitali Klitschko, 41, holds the WBC title, while his brother Wladimir, 37, has the WBA, IBF, WBO and IBO belts.

"I don't think the Klitschkos are going to fight me," said Fury, who aims to extend his unbeaten 20-fight record against Steve Cunningham on Saturday.

"For them to take a risk against a 24-year-old who is younger, bigger, faster and stronger doesn't make sense."

Despite Fury's claims, Wladimir said in July 2012 that he expects to face the Brit "in the next year."

Fury's fight against American Cunningham (25-5) in New York is an IBF title eliminator, while his previous victory over Kevin Johnson moved him up the WBC rankings.

The Manchester-born heavyweight has won 14 of his 20 fights inside the distance and is desperate to add a world title to his growing record.

However, he believes the Ukrainian brothers would rather vacate than risk losing to the 6ft 9in prospect.

"They are very clever businessmen," Fury told BBC Radio 5 live. "They are not your average come-from-the-street bum who has made it in boxing and picked up a few quid - they are very educated men.

"They have made a lot of money out of boxing and have been reigning for a very long time so why would they risk it? What will they gain?

"I will create my own era. I will take on all fighters and all comers and defend my titles anywhere in the world."

Fury, who has beaten domestic rivals Dereck Chisora and Martin Rogan in the last two years, believes the heavyweight division has gone stale because of the Klitschko brothers' dominance.

"The glamour will return to this division when a British, American or Irish fighter wins the heavyweight championship of the world," said Fury.

"After I have knocked out Steve Cunningham and done a job on Pulev, I am going to get into Wladimir's face."

"I think Cunningham will run away like a rabbit," he said. "I am going to end up chasing him around the ring before I land one on him and then it's going to be curtains.

"I have not come over to New York to play tip-tap boxing with cruiserweights, I came here to do demolition jobs."