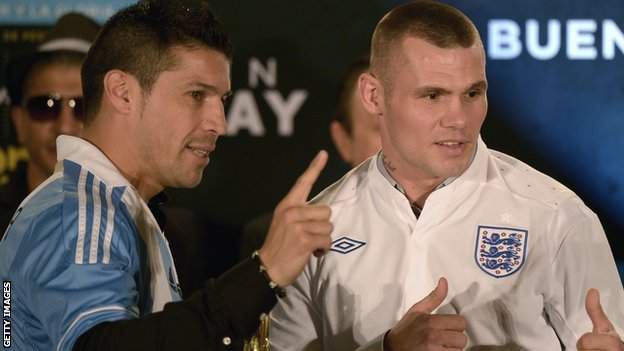 Sergio Martinez won Argentina's equivalent of Sports Personality of the Year in 2012, which must have been nice for the fella. It's just that Martin Murray probably could have done without knowing about it.

"I knew he was a big star," said Murray, "but when I found out he beat Lionel Messi into third place, it opened my eyes a bit." For anyone not aware of Lionel Messi, he scored 91 goals last year, for some Spanish outfit called Barcelona.

On Saturday, St Helens middleweight Murray challenges for Martinez's WBC crown in a Buenos Aires football stadium built for 50,000. The fight was announced by Argentine president Cristina Kirchner last December and is Martinez's first in his homeland since 2002, eight years before he finally landed a world title. As such, it is expected to be a rocking and rolling sell-out.

But the cruelty of boxing seemingly knows no bounds. As you may be aware, relations have been a bit frosty between Britain and Argentina of late, what with Kirchner repeatedly letting it be known she wants the Falkland Islands back. This political twist to the fight means the atmosphere at the Estadio Jose Amalfitani is likely to be more than a little bit fraught. So far, so terrifying.

"You can't really plan for fighting in front of 50,000 Argentinians," Murray tells BBC Sport. "I've just accepted it's going to be very hostile. I've got about 40 coming over from England and I'm sure they'll make themselves heard. But I'm worried for them. I reckon the safest place will be fighting Martinez in the ring." Aaah, the skewed logic of fighters.

At Kirchner's insistence, the fight will also be shown live on terrestrial television, allowing millions more Argentines to see their conquering hero slap the Englishman from pillar to post. Or at least that's what he's meant to do. Not since Martinez's compatriot Carlos Monzon in the 1970s has a South American boxer captured the public imagination in such a fashion. Martinez dare not lose.

If Martinez's appeal is something of a throwback, his route to the top was similarly old-fashioned. Martinez had been campaigning for 13 long years before he wrenched the WBC and WBO middleweight belts from American Kelly Pavlik in 2010. Stops on the way included the Whitchurch Leisure Centre in Bristol and Belfast's King's Hall. Murray, meanwhile, has been a pro for less than six years.

Which is not to say Murray hasn't earned his chance. In 2011, he drew with WBA title-holder Felix Sturm in Germany before a match with then WBC title-holder Julio Cesar Chavez Jr fell through because he was unable to secure a visa to fight in the United States. "They were frustrating times," says Murray. "I did fall out of love with boxing a little bit. But now that love is back."

Few British fighters have ventured to Latin America and come home with anything more than a broken heart, some cracked bones and perhaps a sombrero as a keepsake. Scottish great Ken Buchanan managed it, winning the WBA lightweight title from Panamanian legend Ismael Laguna in San Juan, Puerto Rico in 1970. And so too did John H Stracey, the pride of East London.

Stracey chuckles when I ask how many fellow Londoners witnessed his greatest fight night. "About 25, I think," he said. "In those days it cost about £300 for a week in Mexico. You could have bought a new car for that."

The year was 1975, the venue a bull ring in Mexico City, the opponent Cuban legend Jose Napoles, the atmosphere strident and sticky. Stracey, his seconds and 25 more intrepid Cockneys bobbing in a foaming sea of 30,000 macho Latinos, sucking in the rarefied air, 7,500 feet above sea level.

"The great thing about boxing is that when you're in the ring, there's only two of you," says Stracey, demonstrating some more of that skewed logic of fighters. For the other boxer in the ring apart from Stracey that night at the Monumental Plaza de Toros was a two-time world champion and the reigning WBC welterweight champion who had been beaten twice in 10 years.

"The boxing ring can be anywhere, as long as you're prepared to get in there and fight," he continued. "You've just got to forget that you are abroad and go in there thinking: 'I'm gonna win, no matter where I am.' I wasn't lonely, I never worried where I was or who I was boxing."

"Martin's got to blank out those 50,000 Argentinians and let Martinez think 'it's just you and me in here now'," says Murray's promoter Ricky Hatton. "If he can do that, he's got a great chance."

Hatton knows a thing or two about fighting in the lion's den - it's just that he was usually the lion, and it was usually his den. Anyone who was present will never forget that heady night he wrenched the IBF light-welterweight title from Kostya Tszyu at the Manchester Arena. For Tszyu, it must have felt like he was being beaten around the ring by 20,000 maniacal Mancunians.

"Murray can't have any inhibitions, he can't be worrying about the crowd," said Stracey. "He's just got to get in that ring and do his thing. The only thing I was apprehensive about was whether I was going to get treated right by the referee and the judges." Fat chance: all three of them were Mexican.

Stracey, however, took the judges out of the equation, recovering from a first-round knockdown and stopping Napoles in the sixth. "There was stony silence," added Stracey. "Almost. Because a couple of Mexicans had started coming round to my side towards the end - they appreciated that I really had a go.

"I had my dressing gown stolen off my back as I left the ring. But then somebody draped a Union Jack over me and I thought: 'That'll do.'"

Stracey had pulled off one of the greatest victories by a British boxer in a foreign ring. It's just that hardly anyone was there to write about it. Fearing Stracey would come up well short, Fleet Street's sports editors thought it wasn't worth flying their boxing writers over. "I thought to myself, 'I'll prove them wrong'," said Stracey. "And what do you know, I did."

Not many British boxing writers will be ringside for Murray's big night, either. But the unbeaten 30-year-old, just like Stracey, thinks nothing is impossible, even against a man beaten only once in 13 years. And that via an iffy decision.

"There's no better chance for me to prove myself," said Murray. "Martinez is a pound-for-pound king, it's in his own backyard, fights don't get any bigger than this. This is my chance to shock the world."

Beat the man who beat Lionel Messi in front of 50,000 Argentines in a football stadium in Buenos Aries and yours should be the earth and everything that's in it. Just keep an eye out for flying cushions - and make sure your gown is done up tightly as you take your leave.