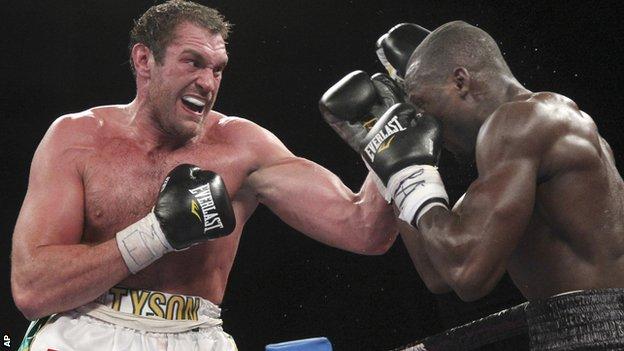 Tyson Fury moved closer to a world heavyweight title fight after knocking out American Steve Cunningham in the seventh round in New York.

Unbeaten Fury, 24, was floored in the second round for only the second time in his career but produced a stunning right hook to claim the victory.

Fury now hopes to fight Bulgarian Kubrat Pulev and could then go on to challenge for the IBF world title.

"He put up a good fight but he lost to the better fighter," said Fury.

"It's a learning experience, many are picked but few are chosen. I'm the ultimate fighter and will fight anybody.

"It was a matter of time before I got to him. Lennox Lewis said 'you can run but not hide' and he [Cunningham] was running around but when I caught him it was curtains."

Fury, who has now won all 21 of his professional contests, with 15 wins coming inside the distance, was not concerned about his own knockdown, his first since during a bout against Neven Pajkic in November 2011.

"You can't go swimming and not get wet," added Fury. "I got caught with a big swinging right hand and if you do not see them coming then you will go down."

Before the fight at Madison Square Garden, Fury said he would "smash Cunningham's face in", and the Manchester-born fighter made a bright start by winning the opening round.

He then shoved Cunningham after the bell, an action that seemed to fire up the 36-year-old American.

Fury was knocked down within a minute of the second round, caught on the chin by an over-hand right from Cunningham, a former two-time world cruiserweight champion.

But Fury stayed in the contest and began to fight back, despite having a point deducted in the fifth for excessive use of the head.

However, Fury ended the fight in stunning style with Cunningham unable to beat the count from referee Eddie Cotton.

Cunningham said: "He put his weight on me and he fought like a big man.

"I'm much smaller and he kept leaning on me so it was like fighting two men. He is 6ft 9in, he is a giant and he has got power. I was dazed and could not make the count."

Fury is likely to now meet undefeated Bulgarian Pulev with the winner fighting for the IBF belt, currently held by Wladimir Klitschko - although the Brit has claimed the Ukrainian will decide to vacate the title instead of fighting him.