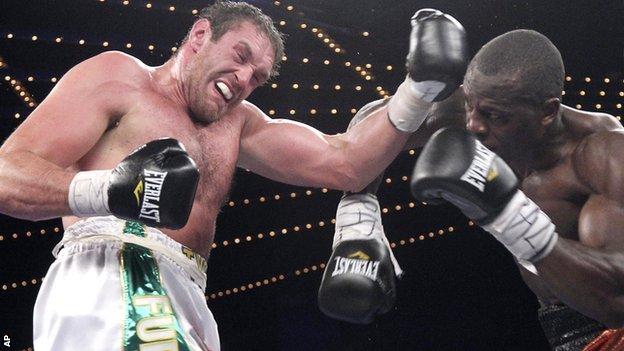 Trainer Peter Fury criticised his nephew, British heavyweight Tyson Fury, for an "out of control" performance against Steve Cunningham on Saturday.

The boxer, 24, knocked out Cunningham in the seventh round in New York, but was floored himself in the second.

Peter Fury, who was not at ringside, tweeted: "That wasn't him last night - I give it two out of ten.

"This is what happens when I'm not there. He didn't follow procedure, he just went out of control."

In securing victory in his first fight in America, Tyson Fury improved his professional record to 21 wins in 21 fights, 15 by way of knockout.

But he was knocked down for only the second time in his career when a looping Cunningham right connected, and was later deducted a point for illegal use of the head.

Peter Fury, who was unable to enter the United States due to visa issues, took to Twitter to voice his displeasure at the showing: "Tyson ignored everyone. He did nothing of what we've been doing in the gym. Flat-footed. No upper body movement.

"Tyson is temperamental and needs guidance otherwise he goes in to fight. There was nothing good with that fight and I'm happy it's out the way."

The victory over Cunningham, 36, clears the way for a fight against Bulgarian Kubrat Pulev, with the winner becoming a mandatory challenger to face IBF world champion Wladimir Klitschko.

And Peter Fury hinted at a proposed date to face Pulev this summer: "July, we want it. [Tyson] was at his worst and he still got up and got the job done. He's the only heavyweight out there right now with bottle."

61 comments
Back to top
unknown