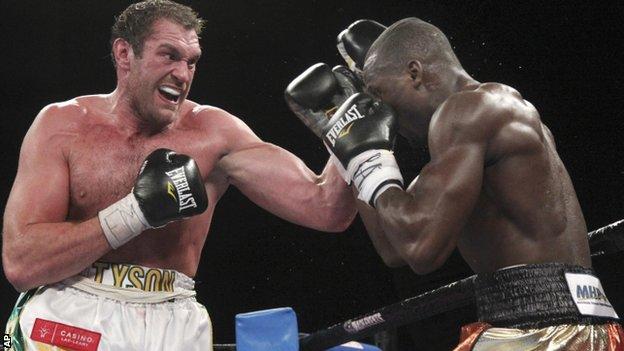 US heavyweight Steve Cunningham has demanded a rematch against Tyson Fury but it will not happen, says the Briton's coach and uncle Peter Fury.

Cunningham accused Fury, 24, of foul play and demanded a second fight after a seventh-round knockout on Saturday.

But Peter Fury, who had also criticised his nephew's performance in the ring, tweeted: "No chance.

"He [Cunningham] got beaten by Tyson, who never bothered to miss his shots and just walked [right through them]."

Manchester-born heavyweight Fury's win on his debut appearance in the United States extended his career record to 21 wins in 21 professional bouts, 15 by way of knockout.

But he was knocked down for only the second time in his career by a looping Cunningham right, and was later deducted a point for excessive use of the head.

The knockout blow came for Cunningham in the seventh, but the 36-year-old from Philadelphia felt he was illegally held by a Fury forearm prior to the final punch.

"People want me to just take it on the chin and move on?" Cunningham tweeted. "My chin was held up by a forearm and I was punched, that's illegal in boxing.

"There are rules for a reason and Tyson Fury didn't beat me within the rules."

Cunningham also suggested he intends to appeal against the decision, but Peter Fury is sceptical and asked on his own Twitter account: "Did he go down with an elbow or solid hook on the chin! Silly to moan - it's a fight!"