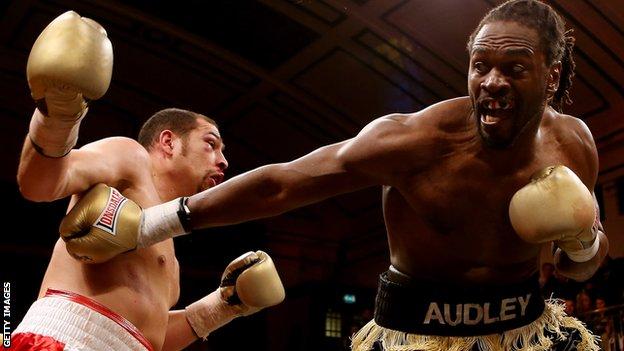 British heavyweight Audley Harrison insists he has not given up on his world title "dream" and believes he has become a "complete fighter".

After his Prizefighter win in February, the 41-year-old fights American Deontay Wilder in Sheffield on Saturday.

"I am still living my dream and focused on my goal of becoming world champion," said the 2000 Olympic gold medallist.

I am a complete fighter, very rounded and I am ready to go

"I set a goal to be world champion and quite a few times I have fallen, but each time I have got up."

Harrison suffered his sixth defeat as a professional when he was knocked out in the first round by David Price in October.

His only world title shot ended in defeat, losing to David Haye in 2010, but he insists he has not lost any of his ambition.

Harrison, said: "I knew after Prizefighter I was going to get opportunities. I was so good in that, I created a stir.

"I said I was looking for someone in the top 10 and so I couldn't ask for anyone better than America's next big thing.

"After David Price, people thought they wouldn't see me again, but setbacks pave the way for comebacks. At 41, I am a complete fighter, very rounded and I am ready to go."

The bout, arranged just five weeks ago, takes place at the Motorpoint Arena on the undercard of Amir Khan's headline fight with Julio Diaz.

"There is a new, younger lion on board and his name is Deontay 'The Bronze Bomber' Wilder," he said.

"He (Harrison) is blocking my path of becoming the next heavyweight champion of the world."