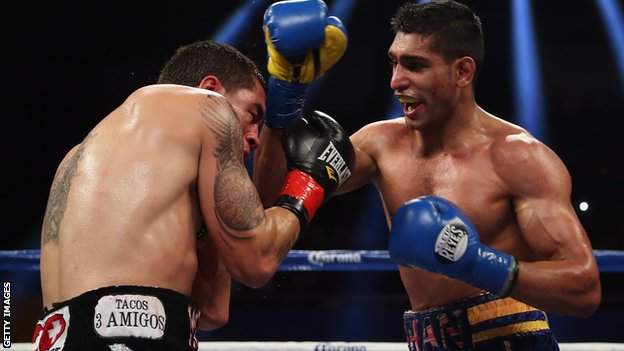 "It's going to be good to fight back in England, this could be the last time I ever fight here," the former welterweight world champion told the BBC Asian Network.

"Even though I'm taking a pay cut, I'm coming back for my home fans."

Khan's most recent bout came in December, when he stopped Carlos Molina in Los Angeles.

The Briton lost his world titles in a controversial defeat by Lamont Peterson in December 2011 and was then beaten by Danny Garcia in a WBC super-lightweight title fight last year.

But the 2004 Olympic silver medallist says new trainer Virgil Hunter has sharpened him up inside the ring.

"I'm super fit now," he said. "I make the weight right and I'm spending a lot more time inside the ring sparring."

Mexican Diaz, 33, is a former two-time lightweight world champion who has 40 wins from 48 fights, with 29 knockouts.

But the California-based boxer last held a world title in 2007 and has lost four and drawn one of his last 11 encounters.

"This fight will straight away elevate us back into world title fights," said Khan.

"But I am not thinking any further than this fight yet. I just want to get through this one and then we will know exactly where we are.

"I need to thank Julio Diaz for coming all the way from America. No-one likes to come to me and fight in my home country, so it is great Julio Diaz has shown bottle and come over."

The 21-year-old, who enjoyed 66 wins as an amateur, won a flyweight bronze medal for Pakistan in the 2010 Commonwealth Games after being overlooked by the Great Britain performance programme for the London Olympics.

He said: "I've been waiting for this day for two and a half years now, I can't wait. I see what Amir's achieved and if he can do it then so can I. I want to become a world champion by the end of 2016."

Also on the card is 2012 Olympic bronze medallist Anthony Ogogo, as he takes on Telford middleweight Kieron Gray in a six-round contest.

The 24-year-old from Great Yarmouth has not fought since last summer's Games but now feels the time is right to step up.

He said: "I want to become the best middleweight in the world, whether it takes three years or six years, it doesn't matter."