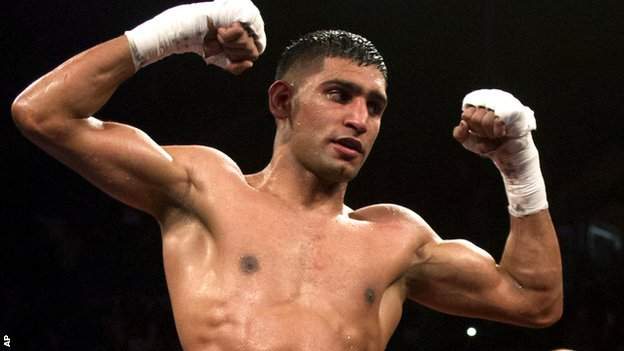 Spend an hour on Twitter after an Amir Khan fight and you will discover why the Bolton-born boxer doesn't spend more time in his home country than he strictly needs to.

The amount of ill will out there for a man who won a silver medal for Great Britain at the 2004 Olympics and a world title as a pro is depressing. Amir Khan is arrogant, Amir Khan is an embarrassment, Amir Khan can't box. No, really, this is what people are saying.

And this after he gave Sheffield fans - and thousands more watching on television - one of the most entertaining fights of the year, a barnstormer against Mexico's Julio Diaz at the Motorpoint Arena. That's gratitude for you.

"What a fight. It had everything. It had class, speed and skill from Amir Khan, and dogged determination from his opponent. Diaz was always in the contest and he always carried that one punch that could have ended it. But Khan stayed on his feet and saw it through. It was a tremendous contest."

In truth, the fight against Diaz revealed that Khan is always likely to come up short against the very best because he is unable to break the habit of being drawn into a war almost every time he fights. And left hooks are drawn to his face like iron filings to a magnet. His trainer Virgil Hunter can get under the bonnet and tune his defences, but he cannot put muscles on his chin.

But it is this defensive susceptibility which makes Khan such tremendous box office. The fight against Diaz followed a similar path to his ding-dong engagement with Marcos Maidana in 2010, which was voted fight of the year by United States boxing writers. Indeed, he is hardly ever in a bad one.

Few British fighters have provided so much bang for their buck - Nigel Benn? Naseem Hamed? - yet instead of thanking Khan for his entertainment, his heart and his bravery, many choose to focus on his deficiencies.

It has apparently been forgotten by some, but Benn was wobbled many times during his career and stopped four times. However, unlike Khan, the former two-weight world champion was wildly popular and remains so to this day.

Sir Henry Cooper is perhaps the most loved British fighter in history, yet he lost 14 fights and was usually found wanting against elite-level heavyweights. This is not a criticism of Cooper, merely a comment on how people's attitudes towards boxers and boxing have apparently changed down the years.

This antipathy towards Khan is not a new development. Ringside observers were disgusted by the reaction of sections of the crowd when he was knocked out in less than a minute by Breidis Prescott in 2008. Khan was booed out of the ring that night while some of the abuse thrown his way was racially motivated, as it was again before and after his defeat of Marco Antonio Barrera in 2009.

Khan has rarely complained about his treatment and when he did a few years ago - "if I were a white English fighter," he said, "maybe I'd have been a superstar in Britain" - he was criticised by some for playing the race card.

Khan's detractors on the home front will be buoyed by the news that Khan is unlikely to fight in Britain again. His next fight will take place in the US in December, when he is pencilled in to face the winner of the light-welterweight tournament that kicked off in New York on Saturday.

Danny Garcia, who knocked Khan out last July, beat Zab Judah with a unanimous points decision at the Barclays Center in Brooklyn and is scheduled to fight the winner of next month's bout between Lamont Peterson and Lucas Matthysse.

If he emerges victorious from that lot, Khan will probably land his dream fight against Floyd Mayweather next year. Mayweather will probably stand Khan on his head and people will say he can't box. So it goes.

Khan out until December

Because of Khan's wedding to Faryal Makhdoom next month, followed by the Muslim holy month of Ramadan (9 July - 7 August), he will not box again until December when he could fight for one of his former world titles

Anthony Ogogo's pro career got off to a flying start in Sheffield courtesy of a second-round knockout of Kieron Gray. But if he needed a reminder of the harsh realities of the hardest game, he only had to watch one of the previous fights.

Twelve years ago, Audley Harrison knocked out Mike Middleton in one round to launch himself in the paid ranks but the 2000 Olympic champion was sparked in a little over a minute by American prospect Deontay Wilder on Saturday.

"It's going to be hard to come back, no doubt about it," said Harrison. "I'm 41, it's looking like it could be the end." Expect Audley to box on.

Over in Buenos Aires in the early hours of Sunday morning, St Helens middleweight Martin Murray came up short against Argentine hero Sergio Martinez, but it was a tremendously game performance by the Englishman.

Victory for Murray would have ranked alongside Lloyd Honeyghan's defeat of Don Curry in 1986 and John H Stracey's win over Jose Napoles in 1975 as the greatest performances by a British fighter in a foreign ring.

However, all three judges scored it 115-112 in the WBC title-holder's favour, despite the fact that he was down twice and looked like he had been in a fight with a threshing machine by the time the final bell tolled.

It is Murray's first defeat and he will come again. If Birmingham's Matthew Macklin can dethrone WBA champion Gennady Golovkin in June, and with Londoner Darren Barker standing by, we could finally have the Benn-Eubank-Watson-style middleweight tournament we have been denied for so long.

211 comments
Back to top
unknown