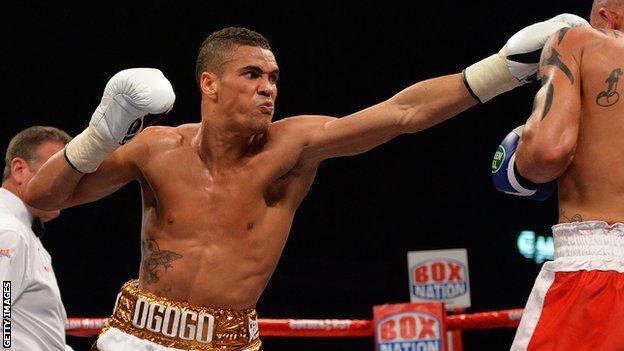 Olympic bronze medallist Anthony Ogogo is lining up a fight in Atlantic City just three weeks after knocking out Kieron Gray on his professional debut.

The 24-year-old middleweight could be given a spot on the Lamont Peterson against Lucas Matthysse bill on 18 May.

"I'm unscathed. My face is fine, my hands are fine, so hopefully I'll be fighting in Atlantic City on what is a massive card," he told BBC Sport. 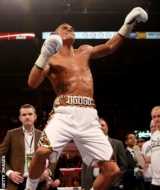 "If I can gain some experience over there, that would be brilliant."

Ogogo made short work of Gray in Sheffield on Saturday night, forcing a second-round stoppage when he

No opponent has been named for the Lowestoft-born fighter's US debut, but the London 2012 bronze medallist acknowledged that he needed experience against different types of fighters before he could contemplate any kind of title bid.

"I want to box some southpaws, some guys who are bit looser," he said.

"I'm not deluded. I know I'm a long way from 12-round and world-title level, but I want to keep learning and progressing.

"I'm a novice, I've had one fight. It took Amir Khan four years to win a pro title. It can take a long time. I'm still a baby."

And after Saturday's sparkling debut performance on the undercard of Khan's narrow points win over Julio Diaz, he says he wants to become the face of British boxing.

"I think British boxing is waiting for a character and someone to take it by the scruff of the neck and I'd love to be that guy," said Ogogo, who also wants to fight at Norwich City's Carrow Road stadium in the future.

"British boxing is ready for something new. I'd like to start a new era.

"I think my first win was a statement of intent. He'd only been put down once and we thought he would take me the six rounds.

"I was never renowned for being a big puncher as an amateur, I was more renowned for speed - but I believe speed is power.

"Muhammad Ali, Sugar Ray Leonard and Oscar De La Hoya did the same and they're the guys I want to base myself on."