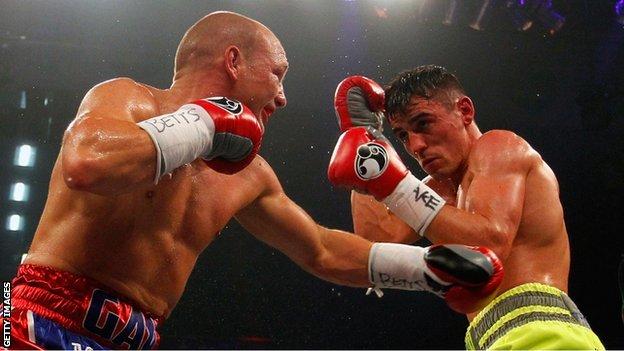 But despite the Welshman's trademark busy start and some late flurries, Crolla's accuracy clinched the upset.

But Rees' plans are now in tatters after the third defeat of his career against a domestic opponent he had been tipped to beat.

Instead it is Crolla who advanced his claims for a shot at Rees' Scottish stable-mate, although Burns on 7 September in Glasgow and if he wins that could make a title defence at New York's famous Madison Square Garden.

Other champions include Cuba's Richard Abril, who has the WBA belt, and Miguel Vazquez, the IBF title holder.

Rees, a veteran at 33, was headlining the show at the USN Bolton Arena after because of a hand injury sustained in training.

Manchester man Crolla came into the fight on the back of a great British battle with Liverpool's Derry Mathews - a former Rees conquest - which ended in a draw in March.

Rees was the busier man in the early rounds but little got through Crolla's tight defence and the Manchester fighter was able to catch Rees with some good shots as the Welshman came forward.

A clash of heads in the fourth saw Rees pick up a small cut in the corner of his left eye and Crolla upped the tempo in the fifth, pushing Rees back for the first time in the fight.

Rees responded in the sixth, getting through with some good combinations to the body of a man seven years his junior.

The ninth saw both men go toe-to-toe and Rees came off worst, dabbing away at a cut that another accidental clash of heads had opened above his right eye with Crolla's cut high on his head.

Rees seemed to touch down with his gloves in the 10th under pressure from Crolla but referee Phil Edwards ruled it a slip, although he did also issue a final warning to the Welshman for punching to the back of the head.

Both men raised themselves from their fatigue to treat the Bolton crowd to some big blows in the final round.

But despite the odd thumping connection from Rees it was Crolla who emerged with the biggest win of his career that takes his record to 26-4-1, while Rees slumps to 37-3-1.

Dodson lost to Smith on an unanimous points decision when the pair met in a brutal encounter in March 2010, but had no more luck this time as Smith made off with the Lonsdale belt.

Smith was cut badly in their previous fight and suffered another nick near his left eye in the second round, but came back to drop Dodson early in the third with a short left and open up a more serious looking cut above his rival's right eye.

Dodson responded positively and continued to set the pace but Smith looked classy off the back foot, snaking out accurate left jabs and looking to double up with the hook.

But when the end came it was courtesy of a stunning right round the corner from Smith that caught his opponent flush on the chin. To his credit Dodson kept his feet but referee Richie Davies stepped in to end the contest in the sixth.

Earlier in Bolton, rising super-bantamweight talent Scott Quigg returned to action with an impressive third-round stoppage of William Prado, switching fluidly between head and body to send the Brazilian crashing to the canvas.

Next up for Quigg should be a clash with Yoandris Salinas, after the WBA ordered the pair to fight for the vacant title, and negotiations are underway for a possible fight in September.

Team GB's Olympic boxing captain at London 2012, Thomas Stalker, continued his career in the professional ranks by making short work of Gyula Vajda, knocking down the Hungarian three times on his way to a first-round win.