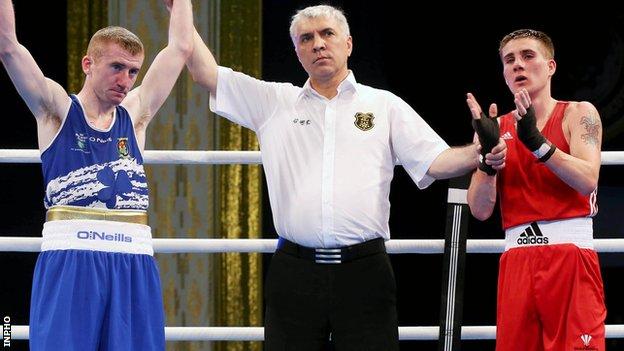 Belfast fighters Paddy Barnes and Tommy McCarthy are through to the European Championships quarter-finals in Belarus after unanimous points wins.

Barnes and McCarthy will be in quarter-finals action on Wednesday.

There was agony for Ireland's reigning European champion Joe Ward who suffered a dislocated kneecap with 20 seconds remaining in his light-heavyweight bout when on course for victory.

The Westmeath southpaw was in control of the bout with Poland's Mateusz Tryc and was heading for victory before the injury, which left him unable to continue.

Another Irish reigning champion, light-welterweight Ray Moylette, went out on a unanimous verdict to Huseyin Karslioglu of Turkey.