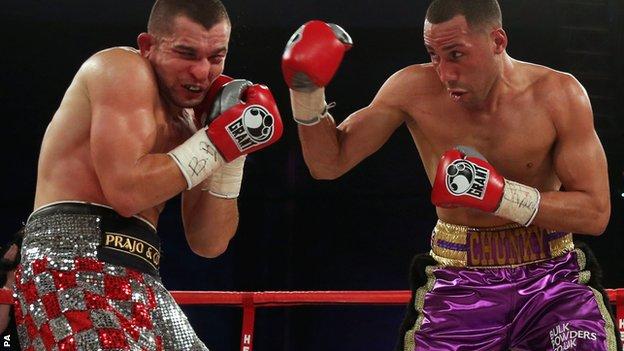 Bozic's corner pulled their fighter out of the contest before the start of the fifth round after DeGale had dominated the opening four rounds in Kent.

"I'm in boxing for the big fights, I love the big shows," said DeGale.

"Carl Froch is a fantastic fighter but everyone is making him out to be like The Terminator, who can't be beaten. But he has lost before and I think I'm all wrong for him."

DeGale has now won 16 of his 17 professional fights, with his only defeat coming when he lost on points to George Groves in May 2011.

But Londoner DeGale has now recorded six successive victories since then and was never troubled by 38-year-old Bozic, who beat Froch in the quarter-finals of the 2000 European Championships when the pair were amateurs.

Aided by some excellent body punches, DeGale was in control throughout, although the action was temporarily stopped in the third and fourth rounds when he landed low blows on his opponent.

But Bozic did not appear to be hurt at the end of the fourth, although the contest was then stopped.

"He could not take it any more," added DeGale. "I have boxed my last four fights with a knee injury, but my knee is perfect now. It was not a vintage performance, but it was nice and I'm pleased."

While a fight with Froch is unlikely to happen yet as the Nottingham boxer wants to face either Denmark's Mikkel Kessler or American Andre Ward next, DeGale's victory raised the prospect of a rematch with Groves.

Another option could be to try to fight the winner of the clash between Australian Sakio Bika and Mexican Marco Antonio Periban, who fight for the vacant WBC world title in June.