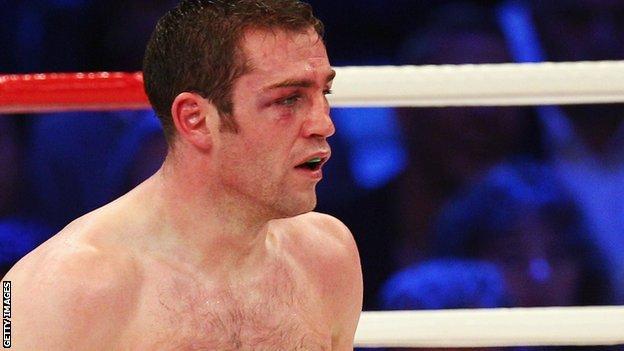 Birmingham's Matthew Macklin failed in his latest bid to land the WBA world middleweight crown as he was knocked out in the third round by champion Gennady Golovkin in Connecticut.

The 31-year-old was outclassed from the start before a brutal left hook to the body from Golovkin ended the bout.

Kazakhstani Golovkin, also 31, maintained his unbeaten record with a 24th stoppage in 27 outings.

The fight was Macklin's third title contest having lost a controversial split decision to Felix Sturm in 2011 and been stopped by Sergio Martinez in March 2012.

He has now lost five of his 34 fights.

Macklin continued: "I had a plan to exploit his weakness which was his lack of experience - he's only been 10 rounds once - but credit to him, he didn't even let me get into any kind of rhythm at all.

"He was patient, he was hard to hit clean, kept the pressure on, picked his punches well and that body shot took it out of me."