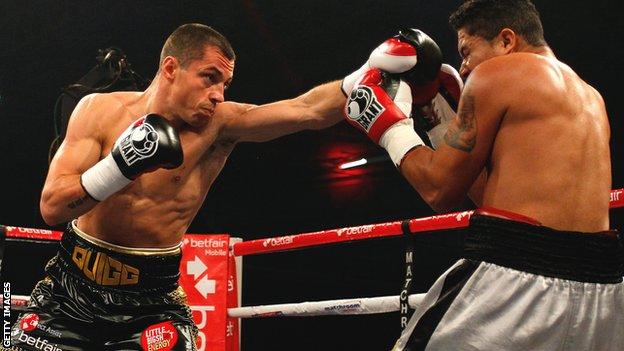 Scott Quigg has insisted there are "no hard feelings" towards Ricky Hatton after the Bury boxer decided to leave Hatton's promotional company.

"It was a hard decision but you get one shot in boxing and one shot in life," Quigg told BBC Radio Manchester.

"I made the decision because I thought it was the best for my career."

At the Bolton Arena on Saturday, Quigg moved a huge step closer to a world title bout against Yoandris Salinas after

The World Boxing Association have ordered the pair to fight for the vacant title and negotiations are underway for a possible fight in September.

It was Quigg's first fight since on the undercard of Hatton's comeback bout against Vyacheslav Senchenko and ultimately the popular former world champion's last as a professional.

In a statement released on 27 June, Hatton said he was "bitterly disappointed" to see Quigg depart to Matchroom, but Quigg - who is unbeaten in 27 contests - believes he had to switch in order to progress his career.

"I had a good think and it wasn't a rash decision," he said.

"Obviously I'm very thankful for what Hatton Promotions have done for me and the position they've got me in.

"But how things worked out at the end - the opportunities weren't coming - I had to make a selfish decision in a way.

"I made the decision and moving to Matchroom is going to propel me to that next level."