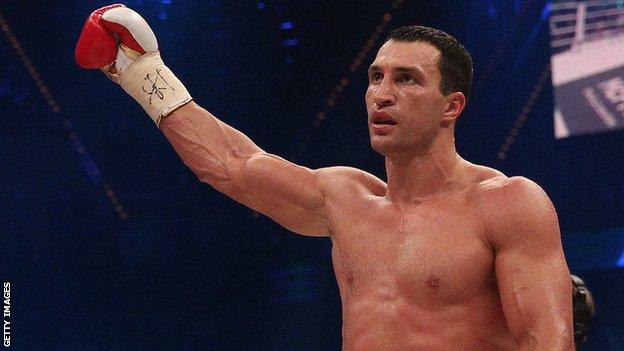 Wladimir Klitschko will defend his multiple heavyweight titles against Alexander Povetkin of Russia in Moscow on 5 October.

Povetkin, 33, has held the WBA heavyweight belt since August 2011 and is unbeaten in 26 professional fights.

Who is Alexander Povetkin?

Ukrainian Klitschko holds the IBO and IBF belts, and is also the WBA and WBO "super champion".

"This is the best fight that the heavyweight division has to offer at the moment," said Klitschko.

The WBA enforced a rule in 2012 meaning Povetkin, their "regular champion", had to face Klitschko as mandatory challenger.

He has successfully defended his title four times, most recently in May when he stopped Poland's Andrzej Wawrzyk in the third round for the 18th knockout of his professional career.

Klitschko retained his WBA, IBF and WBO world heavyweight titles on 4 May with a sixth-round stoppage victory against Italian Francesco Pianeta in Mannheim, Germany.

"I've never boxed in Moscow and I'm looking forward to many Ukrainians and Russians who will come to the arena and create a special atmosphere," said Klitschko, who boasts a career record of 60 wins with three defeats.

He has not been beaten since being stopped by Lamon Brewster in 2004, and his elder brother Vitali holds the WBC version of the world heavyweight title.