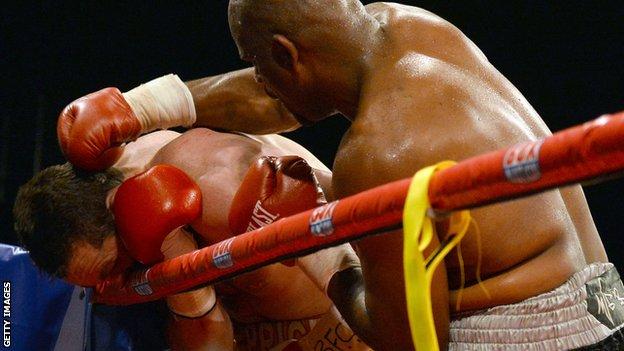 Price, stopped in round two of their first contest in February, appeared to be on course for revenge on his 30th birthday when he floored Thompson, 41, in the same round of the rematch.

But the American recovered to pin the Liverpudlian on the ropes in the fifth.

Referee Marcus McDonnell gave Price a standing count as he failed to return punches, before stopping the fight.

The shock stoppage in February was the former Olympic bronze medallist's first defeat, but he was expected to get his world title ambitions back on course in the rematch at the Echo Arena.

The British and Commonwealth champion had enlisted the help of former world heavyweight champion Lennox Lewis in training to help him iron out mistakes he had made in the first encounter.

However, he allowed the bout to turn into a brawl, which suited Thompson and the veteran shocked the home crowd in Liverpool for the second time to leave his opponent's career in turmoil.

"I would be a liar if I said I did not have butterflies before. David scares the hell out of me, he is a good strong boxer," Thompson told BoxNation after the fight. "But it brings the best out of me."

Price began the first round cautiously but the 6ft 8in Englishman started letting big right hands go in the second and one landed flush on Thompson's chin towards the end of the round to send him to the canvas.

The former world title challenger, who lost to Wladimir Klitschko in 2008 and 2012, beat the count but the knockdown seemed to settle Price and his supporters, who were creating plenty of noise to get behind their man.

That all changed in the fourth, however, as Thompson, who had been targeting the body in a bid to slow Price down, clearly hurt the British fighter with a big right to the midriff.

Price struggled to the end of the round before Lewis bellowed instructions to his corner from ringside during the break between rounds.

But the Liverpool man failed to fully recover and Thompson pounced in the fifth to push him towards the corner before unleashing a barrage of punches that forced his opponent to crouch down.

The referee stepped in to give a standing count but with Price clearly in no state to continue, he waved off the fight to condemn the home favourite to the second defeat of his 17-fight career.