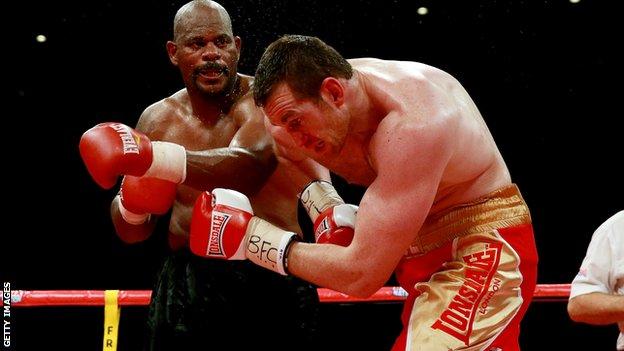 British heavyweight David Price believes his "fighting heart" got the better of him after suffering a second successive loss to Tony Thompson.

Price, 30, floored Thompson in the second round in Liverpool but the American, 41, recovered to get the fight stopped in the fifth.

"Maybe my fighting heart got the better of me," Price said.

"The instructions were to take my time and stick to the game plan but that was something I didn't manage to do."

Price's shock stoppage in February was the 2008 Olympic bronze medallist's first professional defeat, but he was expected to get his world title ambitions back on course in the rematch at the Echo Arena.

The Liverpudlian though allowed the fight to turn into a brawl, which suited Thompson, and, after being given a standing count in the fifth, referee Marcus McDonnell stopped the fight.

"I put him down at the end of the second round and I thought 'I only need to catch him again and he'll go'," said Price. "But obviously that wasn't the case.

"I'll have to have a look back at it next week but I just need to come to terms with another defeat - another major disappointment.

"It was a big occasion so I was more tense than usual so maybe it was that. I don't know."

This time around, 6ft 8in Price enlisted the help of former undisputed heavyweight champion Lennox Lewis.

"We know what we need to fix so we'll go back to the drawing board and fix it," said Lewis, 47.

"David is still British champion and that's not easy to do. He's a big man in the game."

Lewis added later on Twitter: "Price took a lot of hard punches and never left his feet. I think he was just gassed and couldn't take him out when he had the chance.

"David is a great guy and he can rebound from this but there are sacrifices that have to be made to take your game to the next level."

108 comments
Back to top
unknown