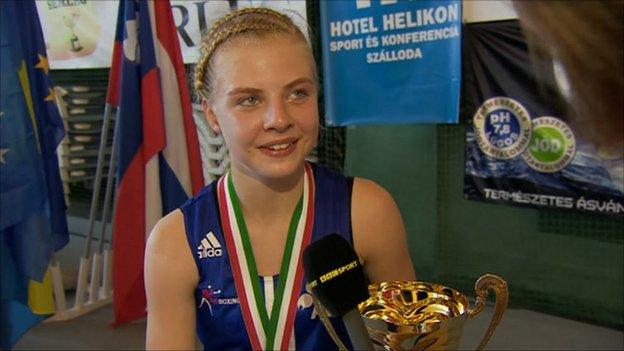 Portsmouth's Ebonie Jones says she is determined to follow in the footsteps of Olympic gold medallist Nicola Adams after winning the junior final at the European Union Amateur Championships.

GB's Jones won the 50kg gold in Hungary after beating the home favourite in her first international tournament.

And the 15-year-old, who fights out of the Heart of Portsmouth Boxing Club, is determined to build upon her success.

"It feels great, all the hard work has paid off," Jones told BBC Radio Solent.

Jones says she was not phased by the vociferous home support and loved the step up in class.

"It spurred me on to win the gold," she added. "It's been a hard week but this is my first international tournament, but it's turned out alright and I've really enjoyed it."

Jones admitted being involved in a tournament along with GB Olympians Adams and Savannah Marshall was surreal - and is now determined to continue training hard and hopefully follow in their footsteps.

"I know I trained hard for it but I did it in the end," she said "It's been really weird as they [Adams and Marshall] are people I look up to and people you see on the television, so it's a bit weird.

"I need to keep fighting internationally. Hopefully [I can follow in their footsteps]."