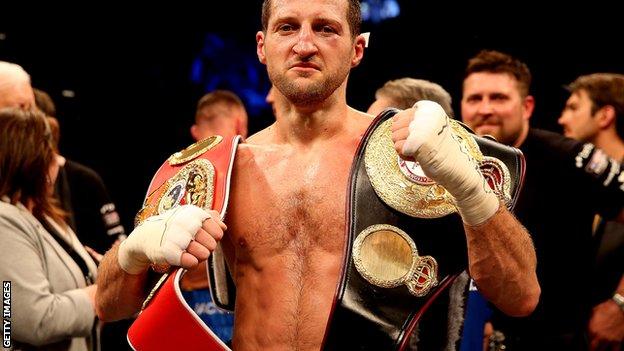 Froch, 36, retained his IBF world title in May with a points win in his second fight with Denmark's Mikkel Kessler.

Rematches with either Kessler or Andre Ward have been suggested since that fight, but talks with IBF mandatory challenger Groves, 25, are under way.

"George Groves is next in line, so we're in negotiations," Froch told BBC Radio 5 live.

"Potentially the fight might happen this year but it is more likely to happen, if it does happen, next year."

Groves, 25, last fought when he knocked out Uruguay's Noe Gonzalez Alcoba on the undercard of Froch v Kessler at London's O2 Arena.

The unbeaten Londoner's 19 professional wins include 15 knockouts, while Froch has won 31 of his 33 fights, 22 by knockout.

And the Nottingham-based fighter played down reports he was unhappy with Groves for sparring with Kessler ahead of his recent meeting with Froch.

"He's promoted by Eddie Hearn at Matchroom, same as me, but we're from different camps.

"He trains in London with Adam Booth, who looks after David Haye. I train in Nottingham and I'm with Rob McCracken. There's no beef but it's not ideal."

Londoner Groves signed with Hearn in March after announcing his split from Frank Warren and pulling out of a challenge for the European super-middleweight crown.