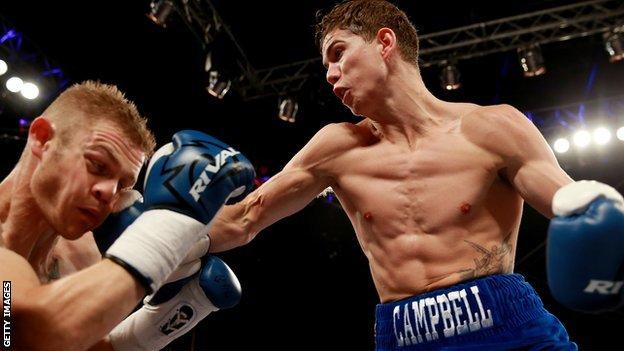 Olympic champion Luke Campbell made easy work of his first professional fight, beating Andy Harris in the first round in Hull.

Campbell, 25, wrapped up victory in one minute 28 seconds, knocking Harris down twice before the referee called time on the bantamweight fight.

"I just kept calm," said Campbell. "I took the Olympic experience into this."

On the undercard, Kell Brook made his return from injury with an eighth-round stoppage of Carson Jones.

"Having my first professional fight, outdoors, in my home town at a packed-out stadium and winning by stoppage in the first round, what more could you ask for?" said Hull-born Campbell after the victory at Craven Park.

"All these people are here for us. They're here to support us so I wanted to use them to our advantage.

"It was my first fight so it's going into a different environment. No headguards, I was doing six rounds which I trained hard for.

"Each fight I'll learn a little bit for the next one."

A stress fracture of his foot meant Brook had fought just once since beating Jones for the first time 12 months ago, with the injury forcing the 27-year-old to pull out of the IBF welterweight title fight with Devon Alexander in April.

However, despite nine months out of action, Brook was in impressive form, landing three right-hand punches early in the sixth round before an uppercut and a right punch had Jones off balance in the following round.

The fight could have been over sooner but it was stopped a round later with Jones flailing.

There was almost a shock in the fight for the Commonwealth light-welterweight belt when Liverpudlian Derry Matthews stopped Tommy Coyle in the 10th round.

The 23-year-old was four rounds ahead, according to the scorecards, before Matthews, 29, landed a left hook which floored his opponent.