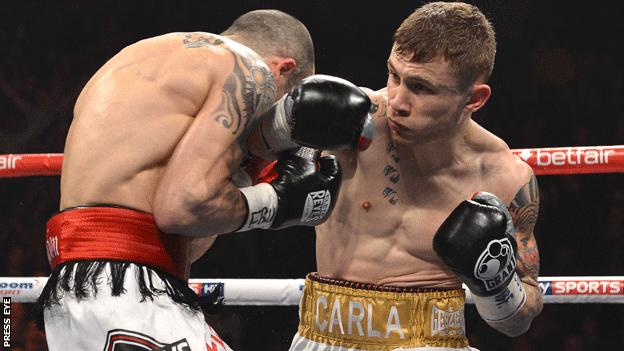 Carl Frampton has been forced to pull out of his scheduled bout at Wembley on Saturday because of an ear injury.

The Belfast super-bantamweight, 26, was due to defend his IBF inter-continental title against Nicaraguan Everth Briceno in London.

However, Frampton revealed on Tuesday he had been ruled out of the fight following a British Boxing Board of Control (BBBofC) assessment.

"An old ear injury mildly reoccurred in a spar," said Frampton on Twitter.

"A specialist initially informed me I was fit to box. (But) Today the BBBofC ruled me out.

"I'm so sorry especially to the people who were coming to support me.

"It's been an amazing camp and I'm gutted that I won't be able to showcase my improvements in Wembley."

Fabian Orozco was scheduled to be his original opponent, but the Argentine was forced to withdraw after being knocked out by Julian Aristule in an IBF latino title bout last month.

Frampton's last outing was a win over Kiko Martinez at Belfast's Odyssey Arena in February.

The fight against Briceno was set to be his first appearance with promoter Frank Warren after parting from Eddie Hearn's Matchroom firm.

Frampton's four-fight deal with the BoxNation channel was scheduled to start this weekend, with the intention he would box for a world title in the third bout of the contract.