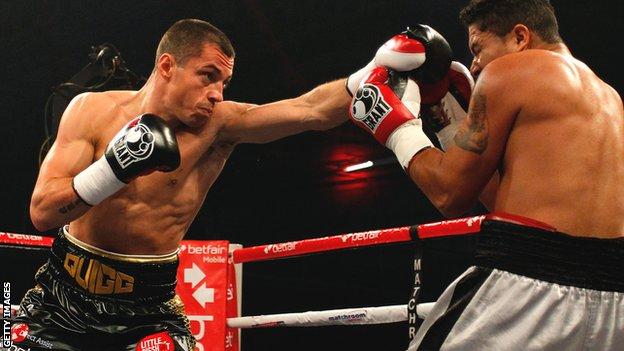 The bout for the WBA's 'regular title' will be staged in Britain, but no date and venue has yet been confirmed.

Unbeaten Quigg became the interim champion in November 2012 by and

"Salinas is a classy operator, but I will be 100% ready to take that title," said the 24-year-old from Bury.

Quigg, who has a professional record of 26 wins and one draw from his 27 fights, to join Eddie Hearn's Matchroom stable.

He went seven months without a contest before returning to action against Brazil's Prado.

"I was thrilled to get back into the ring in Bolton," added Quigg. "It had been a frustrating wait, but now I've got the ring rust off and we've got this world title shot, it has all been worth it."

Salinas, 27, is also unbeaten in his professional career, with 20 wins and one draw from 21 bouts.

Another Cuban fighter, Guillermo Rigondeaux, is classed as the "unified champion" as he currently holds both the WBA and WBO super-bantamweight belts.