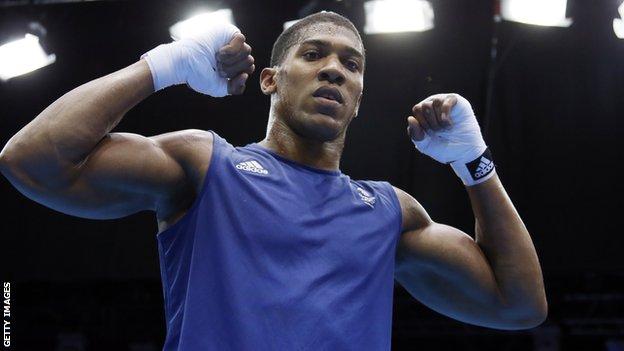 Promoter Eddie Hearn believes Anthony Joshua is "the real deal" after signing him up to be a professional.

The 6ft 6in boxer will make his professional debut on 5 October.

"Obviously the heavyweight division is one which everybody gets excited about and I think we've got the real deal here," Hearn told BBC London 94.9.

"I think we've got someone who can go on to achieve great things in the sport and the heavyweight division.

"He walks the walk, he looks the part, he talks the talk. He's a great ambassador. I think he can be a role model for youngsters as well and it's really exciting times.

"We've finally got our man. It's taken a long time, but we got there."

Joshua has not been in the ring since winning the super-heavyweight gold medal at London 2012.

Last November he stated that he wanted to stay as an amateur and win a world title, but he will now make his profession bow at London's O2 Arena in October.

"His motto in life is 'stay hungry' and I love that," Hearn added.

"He's got the mental attributes to capitalise on Olympic gold.

"I think within three years he'll be ready for world titles. If we're looking at him boxing eight times a year, he'll be 24-0 at the end of a three-year period.

"By that stage he'll be able to look at world titles, but he's got the foundations of potentially a world heavyweight champion and that's what makes us so excited."