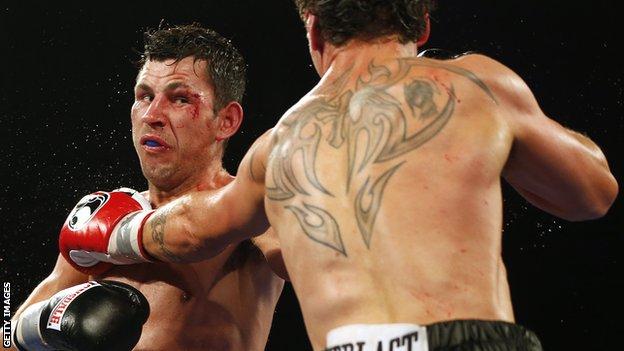 Atlantic City, USA, 17 August 2013: A blow to the solar plexus and Darren Barker is on his knees pawing at the floor. Head bowed, legs twitching, gasping for air. His dead brother flashing before him, like in films. This is boxing, in which films become real.

"I can still feel it now," says Barker, "that feeling of agony. The thought of failing and letting everyone down. I was on the deck for less than 10 seconds but it seemed like an eternity. So many thoughts going through my head. I saw my brother, I saw my daughter. Like they were in there with me.

"Suddenly I thought: 'I'm not going out like this, I've got to get up.' I wanted to dedicate the fight to my brother so badly, I wanted to secure the future for my daughter. So I made it to my feet with a second to spare."

Barker wheels backwards, straining every sinew to avoid the whirring fists of Daniel Geale, the reigning IBF middleweight champion. Mercifully the bell tolls: six rounds down, but still six to go. Geale's corner is convinced Barker is gone. They aren't to know he's been here many times before, every blow only making him stronger.

Barnet, England, 10 December 2006: A hammer blow to the heart and Darren Barker is on his knees pawing at the floor. His brother Gary killed in a car crash, snatched at the tender age of 19.

"Boxing's a lonely sport," says Barker, whose youngest sibling was a junior Olympic champion and tipped to win gold at the 2008 Olympics. "But we were close, best mates, shared stories with each other, spoke about how we were feeling. So when we lost Gary I was on my own.

"I couldn't even imagine boxing without him. I went completely off the rails - drinking, going out, fighting. Not boxing. That was my way of dealing with it. But there was a void there where boxing used to be and it ended up saving me. I don't know where I would have ended up without it."

Stirred by his trainer Tony Sims and galvanised by the power of prayer, Barker got well and started making waves in the domestic ranks. Between November 2007 and April 2010 he won the Commonwealth, British and European middleweight titles. Then it went wrong again.

Watford, England, 23 June 2010: A broken bottle to the back of the head and Darren Barker is on his knees pawing at the floor. Then a fist. Then a boot. This isn't a world title bout in Atlantic City, this is Watford High Street. No referee to call a halt to proceedings. His dead brother flashing before him, Barker out cold.

"I'd been out with a few lads watching an England match during the World Cup," says Barker. "I saw about half a dozen blokes giving this one geezer a bit of aggro. So I went over and said: 'Do you mind? He's obviously petrified.'

"They turned on me and that was that. Back of the head with a bottle, 10 stitches. They stuck the boot in when I was on the floor, cracked my tooth. I was out for a bit, ended up in hospital, needed dental work. Total nightmare."

Barker received £250 and a special commendation for his troubles. Said the judge in charge of the hearing: "He behaved in a way most of us are not brave enough to do and suffered as a result." The story of a boxer's life.

A month before the court case, Barker's girlfriend gave birth to a daughter, Scarlett Rose. Three months later, Barker regained his European title. "Among all the bad there's been a lot of hope and a lot of happiness," says Barker. "I've always smiled through it all as a way of navigating myself to success."

Atlantic City, USA, 1 October 2011: Two right hands to the top of the head from WBC middleweight champion Sergio Martinez and Darren Barker is on his knees pawing at the floor. This English kid was a bum, said some members of the American press pack, a make-weight in a monumental mismatch. Not any more, although some are not willing to relent.

"Going into that fight I don't know how much I believed in myself," says Barker, now 31. "I was suffering from injuries, there was a lot of emotion. But putting in the performance I did, making it to the 11th round, I took a lot from that. I thought: 'Hold on a minute, I can win a world title'.

"But some of the American writers thought I'd gone down a bit too easily, which hurt. The shot didn't look like a massive knockout punch, but it was spiteful. It perforated my eardrum."

The following summer, Barker thought it was all over. Not for the first time. "I was set to fight Simone Rotolo at Alexandra Palace," says Barker, who had already undergone surgery on both hips.

"I was so excited. I could see 'Ally Pally' from my bedroom. But I ruptured my biceps and damaged my tendon in training. That was a real low point, I thought I'd never fight again."

Barker was back in the ring a few months later. Behaving in a way most of us are not brave enough to do and suffering as a result. He knocked out Welshman Kerry Hope, he forced Rotolo to retire three months later. Before his promoter Eddie Hearn gave him the splendid news: "You've got another shot."

Atlantic City, USA, 17 August 2013: "Geale threw a right hand that caught me on the top of the head before I walked clean onto that shot to the solar plexus," says Barker. "I thought maybe I was gone. But I was ready to prove how tough I really am."

Barker, a tribute to the recuperative qualities of the human spirit, is back on an even keel by round eight. Despite a strong finish by Geale, whose fists are still whirring down the stretch, Barker deservedly wins a split decision. 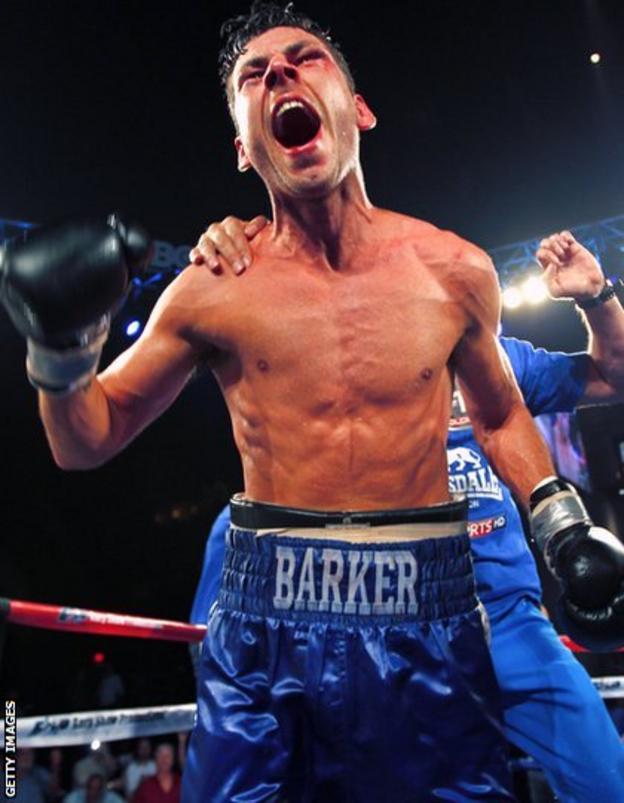 Darren Barker is on his knees pawing at the floor. Head bowed, legs twitching, gasping for air. Only this time it is good news: "And new IBF middleweight champion of the world..."

"For some sports fans boxing only goes as far as the Rocky films," says Barker. "So to recreate that was great.

The first tweet I got said: 'I'd never wanted a British fighter to win a world title as much as that.' To get one of those messages was flattering, to get hundreds was overwhelming.

"I'm not really sure why people wanted me to win so much. Maybe because I don't give it the big 'un? I'm just a normal bloke fortunate to be doing what I love doing. A family man who likes his job."

A blow to the solar plexus and Darren Barker is on his knees pawing at the floor. Head bowed, legs twitching, gasping for air. His dead brother flashing before him, like in films. This is boxing, in which films become real.