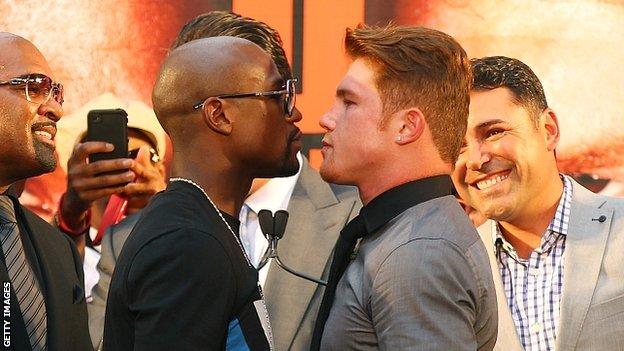 Floyd Mayweather will beat Saul Alvarez in Las Vegas on 14 September, according to the American's old foe Ricky Hatton.

Mayweather, 36, is a five-weight world champion and has not lost in 44 pro fights, while Mexican Alvarez, 23, is unbeaten in 43 paid encounters.

The fight at the MGM Grand is for the WBC and WBA light-middleweight titles.

"Alvarez is younger, bigger and stronger but Floyd will have the speed and movement to keep out of the way," said ex-world champion Hatton, 34.

"He will be Floyd's toughest fight, because Floyd is getting on a bit. Having said that, he lives the life and looks after his body.

"He's also a master of defence so he hasn't been in too many wars, and there aren't too many miles on the clock, despite his age.

"Floyd will make Alvarez miss and any boxer will tell you that there's nothing that tires you out more than hitting fresh air continually."

Mayweather inflicted a first defeat on Hatton in 2007, stopping the Manchester fighter, now a promoter, in the 10th round, and has rarely been taken to the limit in his 17-year professional career.

But one man who did push him close, at least on the judges' scorecards, was fellow American Oscar de la Hoya, beaten by Mayweather on a split decision in 2007.

De la Hoya's Golden Boy Promotions has a long-standing relationship with Mayweather but the firm's 40-year-old founder is something of a mentor to Alvarez, with whom he shares Mexican heritage.

And the six-weight world champion is backing Alvarez to beat Mayweather and usher in a new era in boxing.

"One thing Saul has that people are underestimating is power. He can knock you out with either hand," De la Hoya told BBC Sport.

"But he also has speed and good footwork and is very mature for his age.

"I was very surprised when he beat Austin Trout [on points in April to add the WBA light-middleweight title to his WBC crown]. He boxed a boxer and was able to beat him with ease.

"Austin Trout is no Floyd Mayweather but Floyd is 36 and Saul is 23, so will be it be passing of the torch come 14 September? I believe so."

Mayweather is being paid an estimated £29.1m, taking his earnings for the year to approximately £60m, with Alvarez set to earn about £6.4m.