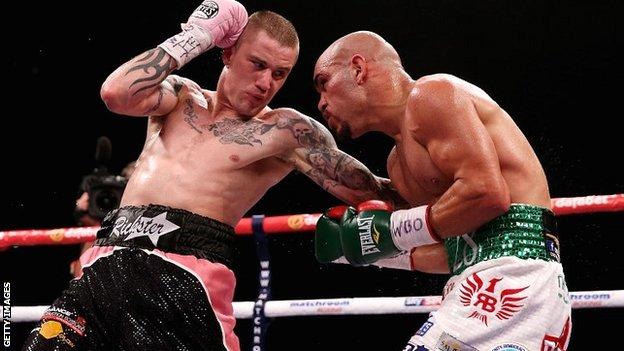 Mexico's Raymundo Beltran - and the bulk of a passionate Glasgow crowd - was left stunned as he departed the ring with only a draw after dominating Ricky Burns in the Scot's fourth defence of his WBO world lightweight title.

Brave Burns was constantly pushed back and landed heavily on occasion.

And his courage was rewarded, controversially, when he retained his belt.

Burns's preparations were unlike any of his 38 previous fights. His wife had given birth to their first child, his son Leon's safe arrival coming only nine days ago after a four-day labour.

The question troubling his fans was what state of mind would he be in to face a challenger known for being a regular sparring partner of the legendary Manny Pacquiao?

The opening blows were fairly evenly shared, both fighters lively and aggressive, while in the second round Beltran had the champion pinned on the ropes for a spell, though Burns managed to take most of the Mexican's artillery on his arms.

Burns promised he had learned from , principally in the way he had over-stretched to land blows on his reclining opponent, only to be caught on the counter.

His exertions in the third round, though, suggested he was still trying to blow the challenger away and he was caught several times with Beltran's left hook before using his jab to good effect.

Beltran stepped up the pace in the fourth and had Burns reeling from two crunching lefts, the second wobbling the 30-year-old from Coatbridge.

The challenger, two years Burns's senior, was controlling the ring and he had the best of the exchanges in round five, though Burns, often on the back foot, had cleared his head and was occasionally getting through the Arizona-based fighter's guard.

Burns continued to use the counter-attack, more out of necessity than choice, to inflict pain on Beltran. His reward was to land two excellent shots to Beltran's head in the closing stages of the sixth.

The home fighter's recovery continued into the seventh as he made good use of a quick left jab, right-cross combination.

But in the eighth round the champion was floored for the first time in three years with a sickening left hook to the head.

Burns took the count of eight to gather his senses and to his credit had the guts to hang in there and land a peach of a left hook on Beltran's chin. Worryingly for Burns's camp, the challenger did not flinch.

The Scot's refusal to panic paid dividends in his bout against Gonzalez, when his opponent retired injured after nine rounds.

Similarly, he kept calm in this bout despite that knockdown and the pain in his jaw and gave his all in rounds nine and 10, without truly disrupting the forward momentum of Beltran.

The crowd feared that Burns might need a knockout in the final two rounds to retain his belt but the technical and tactical nous of Beltran made this seem a forlorn wish.

The final round signalled more of the same, sporadic bursts by Burns merely interrupting the hail of leather-clad fists.

But when the MC announced a draw, Beltran sharply exited the ring while the home fans, though proud of their brave champion, squirmed at the result.

On the undercard, Edinburgh's Stephen Simmons lifted the WBC international cruiserweight silver championship title with a deserved unanimous points win over Germany's David Graf, though the Scot suffered a nasty cut under his left eye in the fifth round.

Scott Cardle, from Lytham St Annes, with plenty of home support from the Glaswegian side of his family, beat Fishburn's Gary Fox, taking a 79-73 points decision in their lightweight contest.

Glasgow's Jonathan Slowey, 22, made it 15 straight wins by outpointing his rangy Spanish opponent Angel Lorente. The unanimous decision of the three judges landed him the WBC international featherweight silver championship.

It was also at that weight that Lochend Boxing Club's Paul Appleby made a winning return to the ring 15 months after his defeat by John Simpson. The South Queensferry fighter emerged from a bruising six-rounder against Chesterfield's Lee Connolly with a 59-56 triumph, a touch harsh on the Englishman.