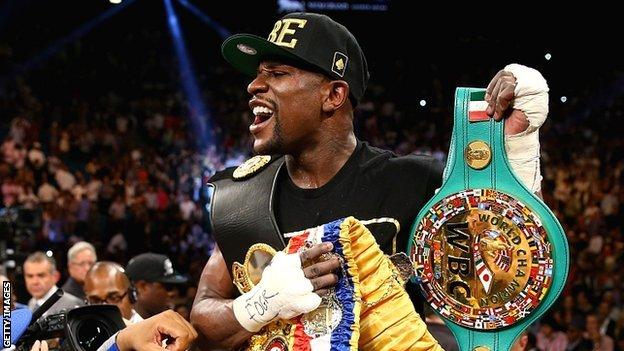 Floyd Mayweather further strengthened his claim to greatness with a one-sided defeat of Saul Alvarez in Las Vegas.

In doing so the 36-year-old American secured the WBC and WBA light-middleweight titles and stretched his unbeaten professional run to 45 fights.

He pockets upwards of $45m (£26.1m) for his efforts, a world record purse, and the fight is set to go down as the most lucrative pay-per-view show in history.

Mayweather was never threatened, making his Mexican foe look ordinary at times, and the announcement of CJ Ross's drawn card was met with stunned silence.

"It is about skills," said five-weight world champion Mayweather. "I came out and showed my skills.

"I just listened to my corner, listened to my dad [Floyd Sr, who is also his trainer]. My dad had a brilliant game-plan and I went out there and got the job done.''

"I didn't know how to get him - it's extremely simple,'' said Alvarez, who was previously unbeaten in 43 fights.

"We tried to catch him but he's a great fighter, very intelligent. There was no solution for him."

With tickets at the MGM Grand changing hands for a reported $30,000 (£18,900), many expected the 23-year-old champion would at least push Mayweather close.

However, such was Mayweather's defensive mastery that it never caught fire as a contest, with Alvarez spending much of the fight either hitting arms or swinging at fresh air.

The first round, which Mayweather won courtesy of little more than a couple of snappy jabs, was a sign of things to come, with the second panning out in much the same fashion.

When Alvarez tried to apply some educated pressure in the fourth, Mayweather made the most of the openings, getting through with some typically incisive combinations.

Alvarez turned to rough-house tactics in the sixth but, as Britain's Ricky Hatton learned when he was beaten by Mayweather in 2007, the American is equally adept on the inside.

Mayweather got through with a vicious uppercut in the seventh, by which time Alvarez looked for all the world like a beaten man.

The Mexican might have nicked rounds eight, nine and 10 as Mayweather took a breather but the American was back on his toes down the stretch, easily getting the better of the final two rounds.

Despite witnessing another Mayweather masterclass, Ross - who courted controversy by awarding Timothy Bradley a victory over Manny Pacquiao last year - somehow thought Alvarez had done enough to earn a draw.

But sanity prevailed, meaning the Mayweather gravy train rumbles on - he has four fights remaining on the reported $200m contract he signed with American network Showtime in February.

Mayweather has now made $73m (£46m) for two fights in 2013 - he easily beat fellow American Robert Guerrero in May - making him the highest-paid athlete in the world for the second successive year.

On the MGM Grand undercard, Danny Garcia, who knocked out Britain's Amir Khan in 2012, was awarded a split-decision victory over Argentina's Lucas Matthysse.

Big-hitting Matthysse was the favourite to take Garcia's WBC and WBA light-welterweight belts but was outboxed by his American opponent.

The 33-year-old Londoner put up a good show against experienced Mexican Pablo Cesar Cano but was ultimately outclassed.