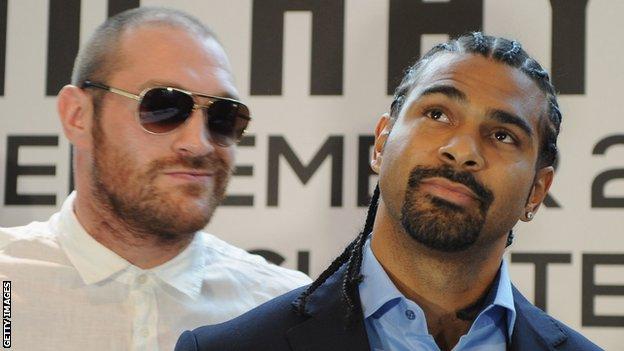 David Haye has taunted Tyson Fury ahead of their heavyweight fight on 28 September by insisting his sparring partners would beat his fellow Briton.

Fury, 25, will put his unbeaten record on the line against former world champion Haye at Manchester Arena.

But Haye, who has lost two of his 28 paid fights, is a big favourite.

"I have brought over big, big punchers to spar. I have no doubt whatsoever that the guys brought over would do a number on Fury," said Haye, 32.

"Rather than bringing over the typical sparring partners, guys used to just taking punishment, I have brought over a load of top-10 heavyweights, some of them unbeaten, with lots of ambition and pride."

Ukrainian Alexander Dimitrenko and Sheffield's Richard Towers have also been part of the Londoner's camp.

"Each of them would make Fury look silly in a fight," said Haye, who was outpointed by Klitschko in 2011 and whose last fight was a stoppage of Dereck Chisora last July.

"Wilder would spark him, Wach would maul him from pillar to post and Towers and Dimitrenko would outbox him round after round.

"Now imagine what I'm going to do with him."

Haye will be giving up six inches in height and seven inches in reach.

Manchester's Fury has been sparring with relatively small heavyweights in Eddie Chambers and Steve Cunningham, who floored Fury in his last fight in April before being knocked out himself.

But Haye said: "Tyson Fury is falling into a false sense of security. Steve Cunningham and Eddie Chambers are powder-puff punchers."