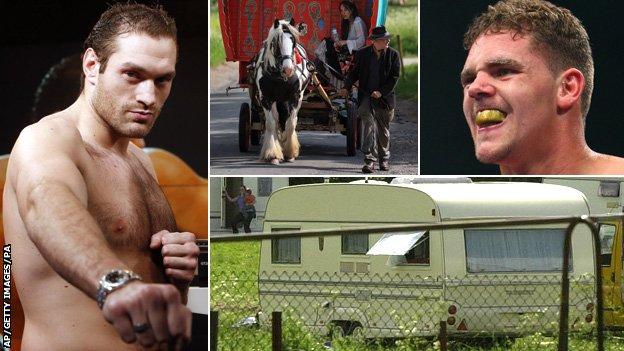 Gypsy and traveller boxers have long been a feature of the amateur boxing scene. Following the success of Tyson Fury and Billy Joe Saunders, are they about to make it big in the professional ranks as well?

Clive Hogben, the trainer and owner of Kettering School of Boxing, is keeping a close eye on his young charges.

There's Cole, 10-years-old with dimples in both cheeks, pummelling away on a punchbag in the corner. Jimmy, 15, is in the ring, sparring hard. His cousin Billy, also 15 but much stockier, is skipping furiously.

Another cousin, Mary Kate, 10, is sitting down and ignoring the commotion. Her lack of action is deceptive though, because she's probably the most talented of the whole bunch.

The four are all from the local traveller community. In fact, so are half the members of Hogben's gym.

"We've got a good reputation in that community," says Hogben, a former professional featherweight boxer. "We appear to have a real settled traveller community near Kettering, and people come here from as far afield as Peterborough, Leicester and Huntingdon.

"I understand how they operate, they are a very proud people. There's a code of conduct which I understand and appreciate.

"As boxers, they have got a skillset developed in their early years, coupled with aggression. They have a natural aggression and desire. They're not all gifted fighters but they've got basic instincts."

Tyson Fury, the former British and Commonwealth heavyweight champion who will fight David Haye early next year, grew up in the Irish Traveller community in Manchester. He says his heritage is a key part of his armoury.

"There's that mysterious old thing - you never want to get into a fight with a Gypsy, do you?" he says. "You never know what's going to happen. And you're going to get messed up."

Hogben's gym is not unusual, because there are thousands of fighters from the Gypsy and traveller communities populating gyms up and down the country. Arguably, these fighters are the lifeblood of the sport at amateur level.

"A lot of the fighters in gyms on the amateur circuit are travellers," says Billy Joe Saunders, the current middleweight British and Commonwealth champion, who is himself a Romany Gypsy.

"In every gym I go to, there are at least five in there. It's tradition. My dad took my brother down to the gym and I followed on. I was five-years-old and I've been in the gym ever since. All I've ever known really is fighting."

Amateur boxing is booming, with the number of people taking part in sessions at the 870 affiliated gyms up and down the country at least once a week up 7% year-on-year, to 150,100.

Gypsy and traveller boxers are key to the boom. Jake Bowers, a Romany journalist whose second cousin John Frankham was a British champion and once sparred with Cassius Clay, says fighting forms a fundamental part of a Gypsy boy's development.

"The fighting heritage comes initially from being part of a community very much on the margins of society," he says. "Historically it comes from having very hard lives.

"Young Irish Traveller boys who grow up at the side of the road are used to being evicted at 3am by the police. That tends to give you a certain attitude and hardness which means you're not going to be scared of anybody in the boxing ring. It's these cultural and physical aspects that give Gypsies the fighting edge.

"Young Gypsy and traveller men are raised to be able to stand up for themselves. Increasingly that means young men being sent to the boxing club. They are a very big deal in amateur boxing in this country.

With so many young Gypsy and traveller boxers at amateur level, it is perhaps a surprise that so few have made it as professionals. That might be about to change because of Fury and Saunders, but why hasn't it happened already?

"As soon as they're old enough to drive, they're off," says Hogben. "They've got to earn a living and they often marry young, which means there's a lot of pressure on them to provide, as the wife and mother stays at home."

Saunders agrees. "The pro game requires more dedication, not just for three weeks but for your whole life," the 24-year-old says. "I am prepared to do it. But some travelling boys pass their driving test, find a girlfriend, get married, and then they need to find work because they need money.

"And they don't want to spend an apprenticeship down the gyms, building things up from the amateurs to get to the pros. It comes to the point where they want to earn money and get on in life and they can't see a future in it."

Hogben says the money in the pro ranks is not always as good as you might expect.

"With the lack of television coverage, pro boxing does not have a lot of money," he says. "If you're a traveller who's had to train six or eight weeks for a fight, you look at the cash in your hand after you've paid your manager and trainers and ask 'is it enough?'

"You could have earned more doing a normal job for all of those weeks. Travellers are not silly - they've got to provide for their children and themselves."

This is why a lot of talented young boxers from the traveller community turn instead to bare-knuckle boxing. The BBC Storyville documentary "Knuckle", broadcast in March 2012, laid bare the violent and illegal world of bare-knuckle fighting inside the travelling community.

Saunders admits: "I probably had about seven bare-knuckle fights when I was a teenager, two of them organised. And you can get to enjoy it. I've known people fight earn tens of thousands, even £100,000. It happens all the time."

Bowers agrees: "Bare-knuckle fighting was traditionally a way of settlings scores between families. It attracts a large following within the Gypsy community on various sites and there can be big prize money as well as betting that goes on."

In the past, talented young traveller fighters had few role models in the pro ranks to aspire to. Following the success of Fury and Saunders, they certainly do now.

"In boxing, me and Tyson are setting the mark to where they can get," says Saunders. "I'm in it to get to the top, where there are big rewards. Look at Tyson - he's getting five million [for fighting David Haye in February]. They're the sort of rewards that I'm aiming for.

"If I wasn't for boxing I would probably be in prison and I have to thank God for giving me these skills.

"I've got two little boys, so I've got to set an example for them to follow. If they see me winning belts and titles perhaps then they'll want to have a go themselves. And that goes for all of the Gypsy and traveller kids.

"Where I live loads of kids want to come and touch my belts and watch me training. It's an honour really, to be noticed for doing something right in my life."