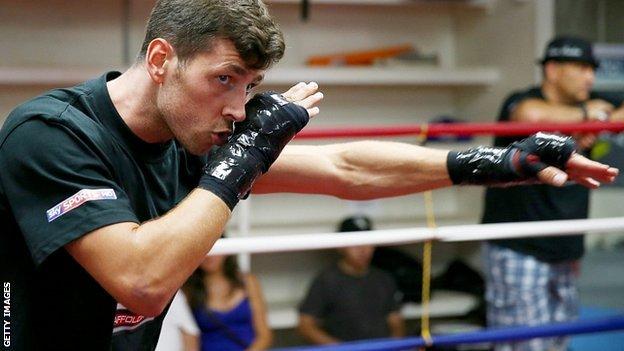 England's Darren Barker will make the first defence of his IBF middleweight title against Germany's Felix Sturm in Stuttgart on 7 December.

Barker, 31, won the title with a points victory over Australia's Daniel Geale in Atlantic City in August.

Barker's promoter Eddie Hearn said there is an option for an immediate rematch in London should Barker lose.

Sturm has been in the professional ranks since 2001, has a record of 38 wins (17 KOs), three defeats and two draws, and has engaged in 19 world title contests.

In 2011 he earned a contentious split decision victory over Birmingham's Matt Macklin before holding St Helens fighter Martin Murray to a draw.

Hearn said Sturm was Barker's favoured opponent from a "financial and legacy perspective".

"This was an opportunity Darren could not turn down," said Hearn of his charge, who has won 26 of his 27 paid fights.

"Even though defeat would lead to an immediate rematch in London, we are all confident that Darren will defend his title in style on 7 December."