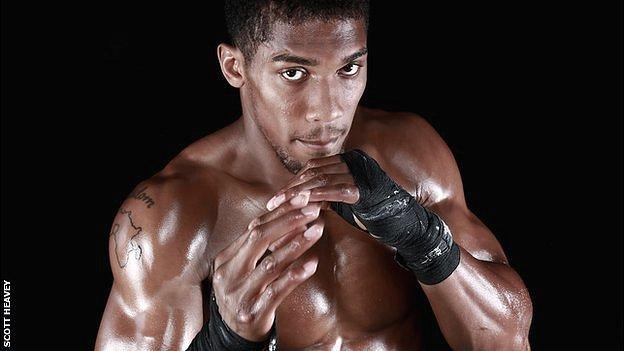 The history of British heavyweight prospects is one of big, tough men gambolling to the slaughterhouse like innocent lambs.

But it is not necessarily their opponents who end up with blood on their hands. Sports writers and fight fans have tended to do the slaughtering, at least in the early stages of a fighter's career.

Which is why the most important part of Anthony Joshua's defensive armoury in the next few years is likely to be an impenetrable hide, rather than a sound technique or a tough set of whiskers.

"There will be pressures outside of the ring," admits Olympic super-heavyweight champion Joshua, who makes his paid debut at London's O2 Arena on Saturday. "In professional boxing you've got to have a real thick skin.

"You've got to plan for everything to go 100%, just like Audley Harrison did when he won gold at the 2000 Olympics. He had his whole structure laid out."

As Joshua well knows, fellow Londoner Harrison has provided him with the perfect blueprint of how not to make your way in the professional ranks.

After winning Britain's first Olympic boxing gold for 32 years, some dared predict Harrison would be fighting for a world title in less than a year. Promoter Frank Warren even suggested that, with careful guidance, Harrison could be even more successful than Lennox Lewis and earn as much as £60m.

But Harrison decided to promote himself, did a deal with the BBC and fought sparingly in his first 12 months, against a string of undercooked - and often underfed - opponents. Which did nothing to diminish his unbridled confidence.

Following a scrappy victory over part-time butcher Mark Krence in his fifth pro fight (as a rule, you know you're in trouble when the papers start mentioning your opponents' alternative means of employment) and only a year after turning over, boxing writers were already calling for their sharpening strops.

The Times spoke of Harrison's "increasingly fantastic ambition of becoming world champion", while also noting that the majority of the crowd at the ExCeL Arena, in Harrison's home town, were rooting for Derbyshire's Krence.

The glamour that attends an Olympic gold had all but faded and Harrison never regained it, his 12-year pro career lurching from one indignity to another.

Matching heavyweights is always going to be tricky, in large part because there aren't too many about. But matching the 6ft 6in, 17-stone Joshua with anyone like his physical or technical equal, while also managing to sell it as something like entertainment, will be nigh-on impossible in the early stages.

The hope is that promoter Eddie Hearn has learned from Harrison's mistakes and that Joshua will not be topping bills, as Harrison did, with regularity.

Joshua's inevitable early blow-outs will be best played out on the undercards of 'bigger' fights, such as on Saturday, when Scott Quigg fights Yoandris Salinas for a portion of the WBA super-bantamweight title on top of the O2 bill.

Meanwhile, Hearn's decision to put his charge into a six-rounder against Italian Emanuele Leo - who has won all eight of his pro encounters - for his first paid fight is a bold one. But again Hearn appears to have learned from history.

After Frank Bruno's ninth professional fight - all of them were early knockouts - his manager had to be reminded by the British Boxing Board of Control that it was time for a tougher test.

In his 10th fight Bruno stopped Costa Rica's Gilberto Acuna after 40 seconds. "I was only doing my job," said Bruno, as the crowd at the Royal Albert Hall vented its frustration at the premature finish.

Alas, Joshua will not have the luxury of learning his craft in the shadows. The early progress of Lennox Lewis, who won Olympic gold for Canada in 1988 before claiming professional glory for his native Britain, took place away from the television cameras, but Joshua's every move will be broadcast live by Sky.

Therefore just about everyone who catches a glimpse of him will have an opinion. And many of those who don't will read about him - whether good or bad - on any number of online platforms.

George Walker, who managed his brother Billy, a London heavyweight prospect in the 1960s, said of overly-critical fight fans: "These are the people you despise. All they are good for is buying tickets. But if that sort of thing gets under your skin, you shouldn't be in the business."

But not all boxers - however big and ugly - are so thick-skinned. Jack Bodell, a British heavyweight champion of limited ability, was baited so mercilessly before, during and after a defeat by Henry Cooper in 1970 that his poor wife felt moved to defend her man in public.

In his fight report for The Observer, Hugh McIlvanney wrote: "The sneering denigration of Jack Bodell has gone beyond a joke."

But McIlvanney also had a job to do, which was to explain why the crowd sneered at him so.

"His footwork gives the impression of having been acquired at a school for deep-sea divers," wrote the boxing doyen.

Joshua, schooled by some of the finest trainers in the country at the English Institute of Sport, is far removed from Bodell, who began his working life as a collier.

However, history shows that it does not matter if you are an Olympic champion or a big-hearted chancer, they'll get stuck into you eventually. Henry Cooper largely got away with it, but he was a special case.

Cooper, a natural light-heavyweight, was never expected to rise to the top of the heavyweight ranks and his almost universal popularity was largely as a result of his two impossibly brave and bloody defeats by the great Muhammad Ali.

Joshua's problem, should you choose to see it as one, is that pesky Olympic gold. Joshua, who is also an MBE, comes with hype, and hype is often a hindrance.

But an inquiring mind and open ears can take you a long way in boxing. "He's sharp and astute when it comes to picking your brain," says David Haye, Britain's most recent world heavyweight champion. "He wants to know. Other fighters don't ask questions, they think they know it all already. They're the guys who get knocked out early doors."

Stay modest, train like the underdog and keep those eyes and ears open. You'll get hacked at by writers and fans along the way but hopefully the real bloodletting, when it comes, will be accompanied by bright lights, huge crowds and astronomical pay-cheques.