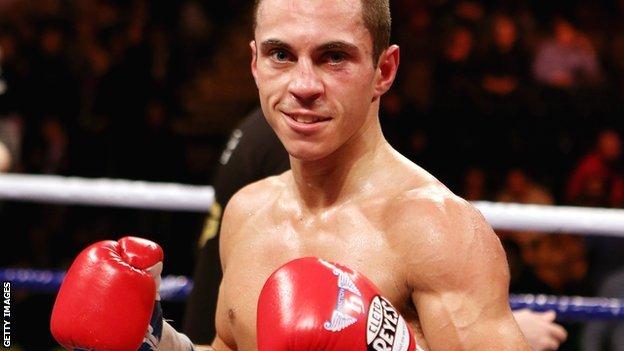 Scott Quigg says "losing is not an option" when he defends his WBA super-bantamweight title against Cuba's Yoandris Salinas in London on Saturday.

Bury's Quigg is defending his title for the first time having been upgraded to full champion status outside the ring.

However, Quigg is not a world champion in the strictest sense because Cuba's Guillermo Rigondeaux is the WBA's so-called 'super' champion.

"This is a very tough fight but I think my best beats his best," said Quigg.

"I have worked too hard from when I was a kid not to achieve my dreams the way I want to, and that's winning the title in the ring against a world-class opponent.

"On paper I'm a world champion but I don't want to be given the title, I don't deserve it yet.

"As far as I'm concerned I won't feel like a world champion until my hand is raised on Saturday night."

Quigg, 24, remains on a collision course with Belfast's European champion Carl Frampton, who defends his belt against Jeremy Parodi on 19 October.

He was meant to have fought on the David Haye-Tyson Fury bill in Manchester last week before an injury to Haye scuppered the show.

Also on the bill at the O2 Arena on Saturday is Welshman Lee Selby defending his British and Commonwealth featherweight titles against unbeaten Norfolk fighter Ryan Walsh.